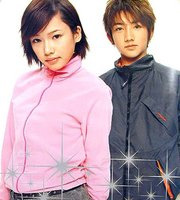 Goto Yuuki (21, photo right), the troubled younger brother of former Morning Musume member Goto Maki (22), has been arrested. Said to be the leader of a group of young thieves, he was arrested by police in Tokyo’s Edogawa Ward on charges of stealing ¥1 million worth of electrical wiring from a construction site in mid-July. The group were spotted leaving the site with the stolen materials in a 2-ton truck. When confronted by a police officer, they abandoned the truck and got away on foot. But the truck had been rented by one of the members and was quickly traced to him. Goto reported to the Komatsugawa police station with his lawyer on Saturday and admitted to all the charges. Goto made his showbiz debut at the age of 13 after he was scouted while attending a Momusu concert. He was teamed with female singer Sonin (24, photo left) in a duo called EE Jump. But within a year, his tendency to stay out all night got him into trouble with his management and he started missing work. After a 5-month forced break, he returned to work but was back in trouble again within three months: photos of him at a hostess club (he was still only 15) were published in a weekly magazine and EE Jump was disbanded. He married in December 2005, at which point his bride was already seven months pregnant.

• As if the recent divorce of former sumo champion Hanada Masaru (36) and former flight attendant Mieko (38) hadn’t already grabbed enough headlines, it now turns out she had an affair with a young actor. Today’s issue of weekly magazine “Shuukan Gendai” includes a story about the 6-month affair in 2004 with handsome actor Aoki Kenji (27). Hanada visited his ex-wife yesterday afternoon and they drove somewhere with their three children, returning in the evening. A couple of hours later, he sped off on his motorcycle, and neither made any comment to the waiting reporters. Aoki, a member of the quartet Jack Jack, spoke to the media after an event yesterday, saying there had indeed been an affair. Last night he updated his blog and apologized to his fans for all the fuss. The media have since been taking the stance that the whole thing was probably timed as a publicity stunt by Aoki.

Natsuki Mari to Marry After All
The Return of X Japan