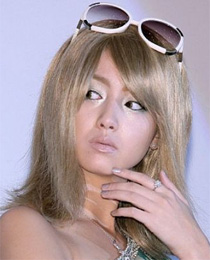 Actress Sawajiri Erika(21) is one of several major celebrities doing damage control in the last couple of days. In Sawajiri’s case it follows harsh criticism of her recent grumpy behavior. On her official website today, she issued a statement formally apologizing to fans and organizers of last Friday’s PR even for her new movie. While on stage before the screening she appeared sorely pissed off about something, kept her arms folded, and gave only brief and testy replies to questions. In her statement, she acknowledged her bad behavior and that she had “betrayed” her fans, and vowed to learn from the experience. Over the weekend, her attitude was criticized as unprofessional and she was slammed by self-appointed showbiz watchdog Wada Akiko (57). She said it had reinforced her image as a self-centered “jo-sama” or movie queen.

• Meanwhile, legendary guitarist Hotei Tomoyasu (45) has been fined ¥300,000 for his assault on friend and fellow musician Maeda Kou (45). The pair got into an argument over musical differences while driving from Chiba Prefecture back to Tokyo in June. The 6-foot-3 Hotei initially refused to apologize for the incident but published an apology on his website yesterday.

• And comedian Nagai Hidekazu (37) has sued two Shizuoka Prefecture credit unions to get back more than ¥11 million that he paid to get himself out of a scrape in the Philippines in May. The married Nagai got caught up in a badger game scam in Manila after he and a friend picked up a couple of local girls.

• Talento Yamada Kuniko (47) attended a PR event yesterday to promote the Pink Ribbon Campaign for the early detection of breast cancer. Yamada is currently undergoing treatment for the disease herself.

• Florent Dabadie (32), who made his name as the interpreter for the Japanese team’s French manager at the 2002 World Cup, has denied rumors of a romance with Fuji TV announcer Takigawa Christel (30). Attending an event in Tokyo yesterday, he said rumors of the romance and split were untrue and that he is currently dating a different Japanese lady. The popular Takigawa is half French and was born in Paris.