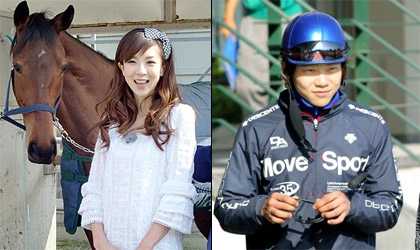 Another showbiz engagement announcement came…and went yesterday. It was reported in several newspapers that talento Hoshino Aki (33, photo left) and young JRA jockey Miura Kousei (20, photo right) were planning to tie the knot next March. The most likely date was thought to be March 14, Hoshino’s birthday and also the romantically themed White Day. But Hoshino’s management agency released a statement saying the couple, while enjoying a happy relationship and hoping to get married at some point, have not yet made any decision about doing so. Though she once said that she didn’t want to marry before turning 40, the clock is ticking for Hoshino. Meanwhile, Miura is said to want to prove himself on the race track by at least winning a Grade 1 race before settling down.

The couple were brought together in October 2008 when Miura was named as a last-minute replacement to ride the debut race by 4-year-old mare Hashite Hoshiino, named after the starlet. Miura himself was in his debut season, which saw him win 91 races, breaking the 21-year-old record for a rookie held by Take Yutaka.

Meanwhile, Yoshimoto Creative Agency announced today that comedian Kosugi Ryuichi (37) has actually tied the knot. According to a press release, he married a 23-year-old ippanjinon November 7. Kosugi is one half of the comedy duo Black Mayonnaise, who broke onto the scene in 2005 when they won the M-1 comedy knockout competition.

AKB48 Riding a Million-Selling Wave
Love Is in the Air