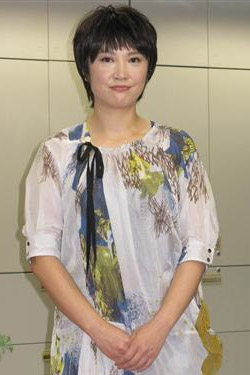 Happier news for actress Hara Chiaki (36), who made a tearful announcement to the media yesterday. She revealed that she recently got married, while also talking about her ongoing battle with cancer. She said that she met her TV producer husband (37) on the set of a Fuji TV drama in 2007. When they started dating, she told him that she had undergone surgery for uterine cancer in February 2005 and was believed to have made a full recovery. But the cancer reappeared at the end of last year and she had her womb surgically removed in January.

Speaking to reporters yesterday, Hara tearfully thanked her husband for having been hugely supportive throughout the ordeal. She said that due to the ongoing treatment and because she has to wear a wig and suffers from swelling, she doesn’t wear a wedding ring and they have no plans for a wedding ceremony. She is scheduled to continue chemotherapy until May of next year. 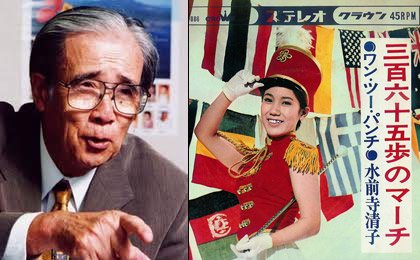 Songwriter Hoshino Tetsuro died of heart failure at a Tokyo hospital yesterday. He was 85. His funeral will be held in the central Tokyo district of Minami Aoyama on November 19. One of the most prolific lyricists of the postwar era, credited with more than 4,000 songs, Hoshino received multiple cultural awards for his contributions to the arts. He was chairman of the Japanese Society for Rights of Authors, Composers and Publishers and honorary chairman of the Japanese Lyricists Association. Among his many hits, he penned the theme song for the hugely popular “Otoko wa Tsurai Yo” movie series and such enka classics as “Hakodate no Onna” (Kitajima Saburo, 1965), “365-ho no March” (Suizenji Kiyoko, 1968, photo right), and “Midaregami” (Misora Hibari, 1987).

After graduating high school, Hoshino went to work on a deep-sea fishing trawler. In 1952, while recovering from illness, he entered a magazine lyric writing contest. His work was recognized and he made his professional debut as a writer the following year. In his lyrics he portrayed the subtleties of human nature and the joys and suffering of life in a way that resonated with fans of enka ballads.