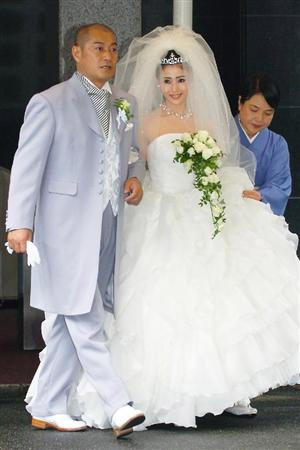 Tokyo police are investigating as a suicide the death of former actress Matsumoto Yuri (42) at the Meguro Ward, Tokyo home where she lived with her husband, actor Matsudaira Ken (56). She was found hanging by the neck from the doorknob of her bedroom by a babysitter at about 3am on Monday morning. According to management for Matsudaira, he has been away from home since November 2, as he is appearing in a stage production in Kyushu.

The couple married in October 2005 and held their wedding ceremony in April 2006 (photo), a period during which Matsudaira was riding a huge wave of popularity following the runaway success of his “MatsuKen Samba II” single. The story even made it as far as the New York Times. The cheesy song represented a complete change of image for the veteran actor, who was already a household name due to his lead role in the long-running TV Asahi samurai drama series “Abarenbo Shogun” (1978-2004). He was married to actress and former Takarazuka star Daichi Mao (54) from 1990 to 2004. Real name Suzuki Yuriko, Matsumoto was the daughter of an actor and a Takarazuka star. Her own career started out in 1983 when she was spotted performing with her father in an amateur song contest. She debuted as an aidorusinger the following year, a path she followed only briefly before making the switch to acting, mostly on the stage. Her showbiz career came to an end after she and Matsudaira married. She gave birth to a son in October 2006.

Popular talento Satoda Mai (26, photo left) is romantically involved with young baseball star Tanaka Masahiro (22, photo center). The two first met on the set of a TV show at the New Year. Both are natives of Hokkaido and Satoda performed on the official theme song for Tanaka’s team, the Rakuten Golden Eagles. They had enough in common that a relationship started early in the summer. When rumors of their romance broke in the media yesterday, they both updated their blogs acknowledging the relationship.

Satoda passed an audition to become a member of pop idol group Morning Musume in 2000 but decided to go to high school instead. She did become a member of the Hello! Project in 2002 when she assed an audition for Country Musume. She performed in a variety of pop idols groups until 2009, during which time she became a regular on TV variety shows and established a career as a talento and actress.

Tanaka became a national sensation in 2005 when he led the Komadai Tomakomai team to a second successive victory at the Koshien high school championship. The following year saw an epic battle between “Ma-kun,” then in his senior year, and Waseda Jitsugyo’s Saito Yuki, who became known as the “Handkerchief Prince.” Waseda won the showdown over two days and went on to win the championship. When Saito decided to go to Waseda University rather than turn pro, Tanaka became the hottest ticket in the draft. He has had a strong first few years but injury kept him out for much of the recently finished season.

From Hostess to Bride
Club hostess turned TV celeb Tachibana Kurumi (29, photo right) announced yesterday on the live TBS show “Sunday Japon” that she is married. She and the president of a major talent agency (42) registered their marriage on the romantic Tanabata holiday on July 7, and they held a wedding ceremony in Honolulu on November 11. Tachibana, who is famous for having been a top “kyabakura” (cabaret club) hostess and for proudly showing her cleavage on TV, is also a writer and a regular guest on the Sunday show. Indeed it was an appearance on the show last December that drew the attention of her future hubby, who contacted her through her publishing company. Yesterday she showed off her Harry Winston diamond wedding ring and also announced – as if it were an afterthought – that she is seven months pregnant.