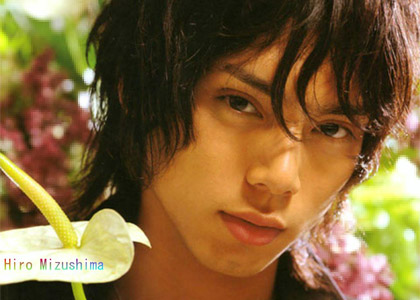 Actor Mizushima Hiro (26) has certainly hit the ground running as a novelist. Publishing company Poplar today named his very first book, “Kagerou,” as the ‘taisho’ (top prize) winner in their 5th annual awards, pretty much guaranteeing that it will be a bestseller. Mizushima, who wrote the novel using the real name Saito Tomohiro, declined the ¥20 million prize money that came with the award. In announcing the winner, Poplar said, “The book has its rough edges but they were more than compensated for by its power,” adding that 8 of the 13 editors on the judging panel had voted for the book. In accepting the award in Tokyo this morning, Mizushima also addressed his recent decision – announced just in September – to quit the agency that had managed him as an actor in order to focus on his writing.

The Poplar awards were established in 2005 and, apart from the first year, there had been no winner of the taisho award until this year. Kagerou was one of 1285 novels submitted this year, by authors ranging in age from 11 to 85. That number was whittled down to seven finalists. Two other novels, “Giniro no Maameido” (The Silver Mermaid) and “Agein” (Again) , received special prizes.

Mizushima was scouted as a fashion model while in university, and in 2006 he landed the starring role as TV and movie action hero “Kamen Rider Kabuto.” Over the following years he had roles in several hit TV drama series. In 2009 he married popular singer Ayaka, and they announced that she was taking an extended break from her music career to battle Graves Disease.
Related stories:
Mizushima Hiro Quits Acting to Write (Sep. 22, 2010)
Related stories:
Mizushima Hiro, Ayaka Married (Apr. 4, 2009)