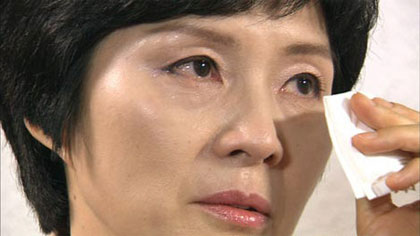 The TBS network announced yesterday that they are postponing the airing of a docu-drama on the famous 1987 bombing of Korean Air Flight 858 by North Korean agents. The decision was made following Tuesday’s artillery attack by North Korea on the South. The 2-hour show was scheduled to be aired on November 29. It includes an interview with one of the bombers, Kim Hyon Hui (48, photo), who was given the death sentence in 1989, but was pardoned by the South Korean president. The show also includes a dramatic recreation of the 1987 incident, in which all 115 passengers on a flight from Baghdad to Seoul were killed, based on Kim’s account.

The interview was carried out this summer when Kim, author of the book “The Tears of My Soul,” visited Japan under heavy security. She also met with relatives of Japanese citizens who were kidnapped by North Korean agents during the 1970s and 1980s. The visit – which required special government clearance as Kim is still a criminal due to her use of a false Japanese passport – and the VIP treatment given to Kim was heavily criticized by the media.

No.3 for Miho, Izam
Talento Yoshioka Miho (30) and singer Izam (38) sent a fax to the media yesterday to announce the arrival of their third child, a baby boy. The former cross-dressing vocalist of visual-kei rock band Shazna, Izam is now a variety show regular. He’s usually the butt of jokes about the abuse he takes from his younger but domineering wife.