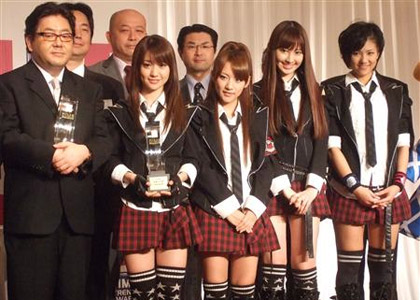 Move over Morning Musume, AKB48 are now the new queens of the oversized female pop unit world. The group have seen their 18th single, “Beginner,” become another No.1 hit on the Oricon chart. But it is also the first single in more than three years to sell over a million copies in a month. The song has sold 1.03 million copies since it was released on October 27 and yesterday it was formally recognized by the Japan Record Association as a million seller for October. The group’s label, King Records, issued a statement saying, “In a time when CD sales are in constant decline, we are delighted to have a million seller. We’d like to thank all the fans who every day give us such huge encouragement and support.” The last single to break the monthly million barrier was “Sen no Kaze ni Natte” by tenor Akikawa Masafumi in August 2007.

Now in their fifth year, the AKB48 concept was created by producer Akimoto Yasushi (54, photo left). Based in the geek mecca of Akihabara, the group is made up of constantly changing sub groups who perform there daily in a special theater. The concept has spawned a slew of spinoff groups and similar troupes in the central Nagoya district of Sakae (SKE48) and Namba in Osaka (NMB48). On Tuesday, Akimoto and several AKB48 members were on hand to receive an award from the Shogakkan-published young businessmen’s magazine “Dime” (photo). The award acknowledged the group and World Cup soccer star Hasebe Makoto (26) as the leading personality trends of the last year, while the main award went to the Viera 3D TV from Panasonic.

Happy Celebrity News
Hoshino, Miura Not in a Sprint for the Finish Line