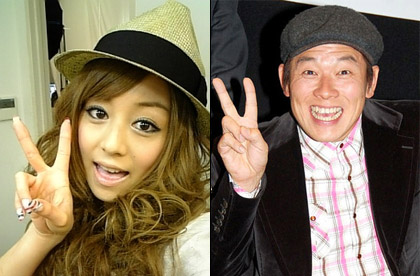 Talento Natsukawa Jun (30, photo left) is engaged to be married, it was revealed yesterday. She and her 29-year-old fiance, the owner of a cafe/restaurant in the trendy central Tokyo district of Roppongi, are planning to tie the knot in early January but don’t have plans for a formal ceremony. The couple are said to have been introduced by a mutual friend several years ago and got engaged at the beginning of this year. Natsukawa, who started out as a pinup model and has since expanded into acting and regular appearances on variety TV, was previously romantically linked to a popular hair stylist in 2008, but at the time she denied that they were any more than friends.

Meanwhile, comedian Red Yoshida (45, photo right) announced on his blog yesterday that his wife is expecting their fifth child next February. He joked, “The missus and I are already up to our eyeballs with four kids, and now number five is on the way!” Yoshida is the tsukkomi half of the popular comedy duo TIM.