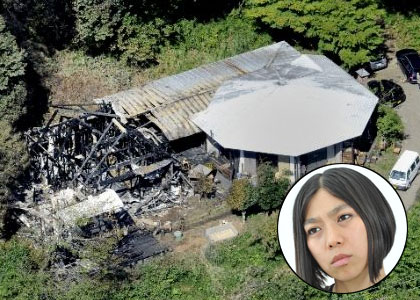 The Sagamihara home of singer-songwriter UA (38) was completely destroyed in a fire on Saturday. The fire in the 300-sq.m. two-storey wooden house is believed to have started about 1:40am on Saturday morning. UA, real name Hasegawa Kaori, her husband (28) and their 3-year-old son were sleeping downstairs and they evacuated the house along with their elder son (13) and two school friends who were sleeping upstairs.

After the long hot summer, the weather in Japan has turned a lot cooler and the family used their wood-burning stove for the first time in months. According to local police the stove is thought to have been the cause of the fire. One of the firemen who helped put out the blaze said, “The fire burned trees more than 20m from the house. If it hadn’t been raining so hard, we probably would have had a forest fire on our hands.”

According to a neighbor, the house was built about 25 years ago by a soprano singer at a cost of about ¥50 million. It has an octagonal room that was used for small concerts. UA and her family have been renting it since she re-married in 2008. They work a neighboring field, where they also keep two goats. UA’s latest album, released in June, was recorded in a studio at the house. UA was married to actor Murakami Jun (37) from 1996 to 2006.