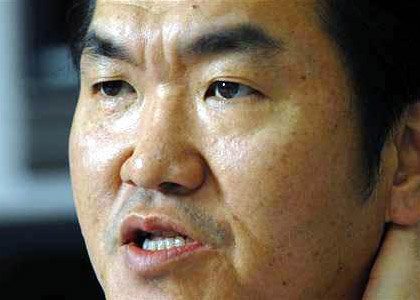 Popular TV host Shimada Shinsuke (54) has been ordered to pay a major sum in compensation for an assault that almost ended his career several years ago. A Tokyo District Court judge yesterday decided that Shimada and the Yoshimoto Kogyo talent agency were liable for ¥10 million in damages for the injuries and humiliation suffered by a female Yoshimoto employee in 2004. The plaintiff had sought ten times that amount.

The incident happened backstage at an Osaka TV studio in June 2004. Shimada was angered by the words and attitude of the woman, 40 at the time and the manager of commentator Katsuya Masahiko. He is said to have taken her to another room to lecture her on manners and became infuriated when she talked back. He allegedly pulled her hair, hit her face against a wall and spat on her. When the case blew up in the media, he gave a tearfully apologetic press conference and stepped down from several regular TV slots. A few months later, an Osaka court ordered Shimada to pay a ¥300,000 fine. The woman was put on extended leave by Yoshimoto for more than 18 months, during which time she underwent treatment for stress-related problems. After the leave finished in June 2006, she claimed, she was fired.

But for a star of Shimada’s stature, the media has a short memory and he eventually returned to being one of the busiest and best-paid celebrities on TV. He is sometimes mentioned as a potentially strong political candidate. The latest court decision will make only the tiniest dent in his substantial wealth, but the case will forever hang over any plans to run for public office.
Related stories:
Shinsuke Fined, May Quit (Dec 11, 2004)
Shinsuke’s Troubles Not Over (Aug 4, 2006)

Paris Hilton Stopped at Narita
The New Kings of Comedy