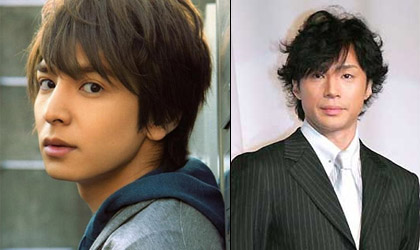 Johnny’s Jimusho veteran Higashiyama Noriyuki (43, photo right) is to play a key role in the latest big screen adaptation of the Tale of Genji, Japan’s and perhaps the world’s earliest novel. The Shonentai member was given the lead role of Hikaru Genji in a similar TV adaptation about two decades ago, but this time will be playing second fiddle to young star Ikuta Touma (25, photo left) as the powerful courtier Fujiwara Michinaga. In other big casting announcements, Nakatani Miki (34) will play the role of the novelist Murasaki Shikibu, while Kubozuka Yousuke (31) will play the mysterious court diviner Abe Seimei.

Directed by Tsuruhashi Yasuo (70), the movie started filming yesterday. Budgeted at over ¥1 billion, it is due for release sometime next spring.

Another Tokio Baby
Another Johnny’s Jimusho star has become a father for the second time, it was announced yesterday. Yamaguchi Tatsuya (38) of the group Tokio and his former model wife got married in March 2008 and had their first son the following May. They now have two boys, though they didn’t announce any names or further details.

Hide’s Wedding Day
Meanwhile Hide (30), vocalist of the mysterious J-pop group Greeeen, has tied the knot. He made the announcement on his blog yesterday that he and and his ippanjin bride got married on September 18. The four members of Greeeen are all practicing dentists and have never revealed their faces or true identity in public. Despite, or perhaps helped by, the mystery they have achieved major chart success over hte last couple of years. They are planning to release a new single early next year.