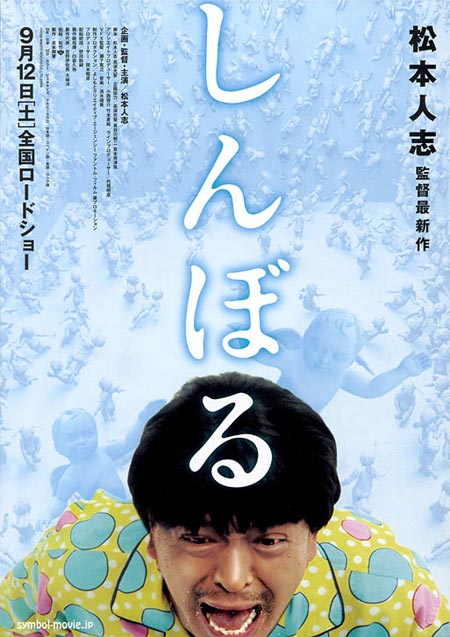 Comedian-turned-director Matsumoto Hitoshi (45, profile) appeared at a special preview screening of his latest movie yesterday. He appeared on stage at the Piccadilly cinema in central Tokyo in the same wig and polka dot pajamas his character wears in “Shinboru,” and introduced himself as the “charismatic comedian Matsumoto.” It was revealed that the movie, the first since his debut “Dai Nipponjin” in 2007, will be entered at the International Film Festivals in Toronto (September 10-19) and Pusan, South Korea (October 8-16). The movie is scheduled to open in theaters here on September 12. Asked if he planned to attend the Pusan event, he said “That’s the time when ‘this’ will be appearing, so it’s not good timing,” referring to the fact that his wife is expecting their first baby in October. Matsumoto and former talento Ihara Rin (26) got married in May.

The IMDB website has the following summary of Shinboru: “A Japanese man wakes up alone in a brightly illuminated white room with no windows or doors. When he presses a mysteriously phallic protuberance that appears on one wall, a pink toothbrush materializes from nowhere, clattering to the floor and setting in motion a genuinely bizarre chain of events. Soon the imprisoned man is engaged in absurd and hilarious attempts to escape the gleaming room, releasing random objects from the walls, creating a life sized mouse trap game in which a rope, a toilet plunger and an earthenware jug full of sushi might just be the keys to his escape. Meanwhile, in a dusty town, a green masked Mexican wrestler known as Escargot Man prepares for an important match. His family gathers around him, worried about his seeming impassivity before battle.”