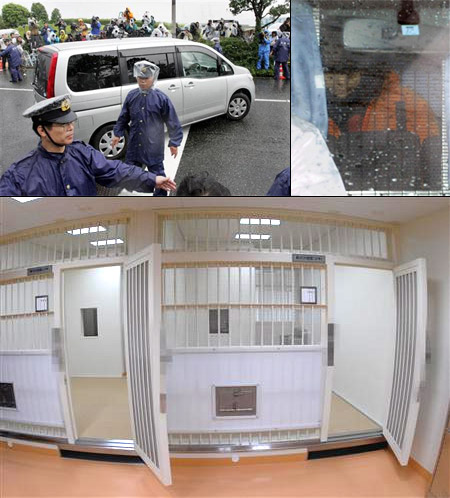 Actress/singer Sakai Noriko, arrested at the weekend for drug offenses, was transferred to the Tokyo District Court this morning. At about 9am, she was taken in a silver MPV from the Tokyo Wangan police station, as some 100 reporters braved the wind and rain. She will spend the next ten days at the Wangan detention center. The center opened in March 2008 and is said to be realistically depicted in the hugely popular “Odoru Daisosasen” (Bayside Shakedown) movie series. It holds 192 detainees, with men and women segregated. Detainees receive three meals a day and, during the summer season, bathe once every five days. During a 7am-9pm day, detainees can expect to face up to 8 hours of questioning.

Meanwhile, reaction to the arrest has been varied. Saturday’s edition of the TBS news show “Joho 7 Days – Newscaster,” which aired shortly after Sakai’s arrest on Saturday night, had an audience rating of over 30%. The show has a recent average rating of 12.8%. Police headquarters have been busy fielding calls from Noripi’s fans, some of whom have volunteered to take her place. Her fellow celebrities, as always protective of their own image, were careful to mix criticism with their sympathy. producer Terry Ito said, “I think she’s a bit spoiled. It might do her good, as a person, to spend some time in prison.” Veteran singer Wada Akiko, never short of an opinion, was also harsh in her judgement, adding “We really should stop calling her Noripi.” Victor Entertainment has decided to cancel the September release of a double hits album, “Golden Best,” has recalled CDs and DVDs from music stores and removed her music from download services. Her TV commercial contracts for the Toyota Noah and the painkiller brand Norshin will no doubt be canceled, though both already finished airing earlier in the summer. Ironically, Sakai is the star of a series of movies made as a PR tool for the recently introduced lay jury system. DVDs of the movie have been withdrawn.