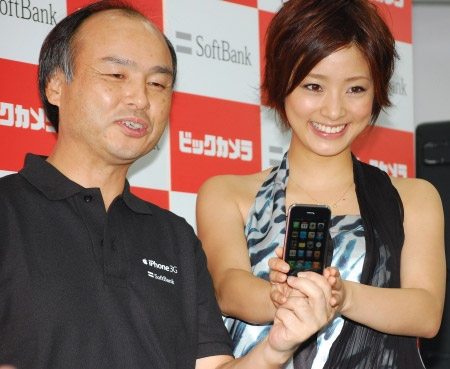 Threats of a bomb attack against a popular celebrity were posted on the Japanese version of Wikipedia, according to a police statement issued today. The poster wrote that a hand grenade would used to kill people at a concert featuring talento Ueto Aya (23) on August 31. Ueto is scheduled to perform at the “Happy Magic” event at Zepp Tokyo on that date, her first concert in about two years. Police at the nearby Tokyo Wangan Station issued a warning to organizers and requested that security be beefed up for the event. They are also investigating the incident as a possible criminal case. Such online abuse is common Wikipedia, which allows anyone to update it’s millions of information pages. The organization has recently begun looking at enforcing a change that would require editorial approval for all changes to pages about living people. A popular actress in TV dramas and commercials, Ueto is a former idol singer who is most often seen these days as the face of the Softbank mobile phone network (photo: Ueto and Softbank CEO Son Masayoshi). 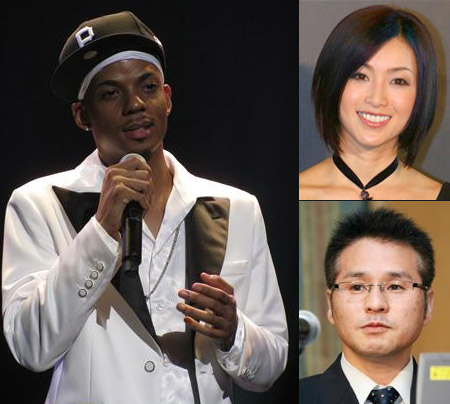 Japan’s only African-American enka singer kicked off his first nationwide concert tour this week and played Nakano Sun Plaza in Tokyo last night. Jero (27) has some support from fellow enka stars Fuji Atako (48) and Sakamoto Fuyumi (42) as he performed a 21-song set for 2,000 fans. He wore a white suit set off as usual with a black baseball cap. The tour will take in 35 venues and continue until December 2. jero will also be making many in-store appearances in support of his upcoming album, “Covers2,” due for release September 23. The first single, “Tsumeato,” went on sale August 19.

• The line “I bought from a foreigner” is almost a cliche of drug arrest reports, but it seems that at least in the case of actress/singer Sakai Noriko (photo top right) and her husband, it’s true. Among the numbers stored on the phone of an Iranian arrested earlier this year, police found that of Takaso Yuichi, Sakai’s husband arrested August 3 for possession of amphetamines. Meanwhile, the latest issue of weekly magazine “Shuukan Shincho” has details of Sakai’s turbulent early life, provided by the first of two step-mothers. Born to a yakuza father, she was abandoned as a baby when her mother eloped with a younger man. With her father in prison at the time, she was left at a temple in her father’s home prefecture of Saga until she was taken in by her father’s sister and went to live with her in Saitama Prefecture. When her father remarried, the pre-teen Sakai moved back with him and her step-mother in Fukuoka. Shortly afterward, a baby boy was born (he grew up to became a member of the Yamaguchi-gumi crime syndicate and was arrested on drug charges in July) and later a baby girl. At that time, Sakai’s father was having an affair and the marriage soon ended in divorce. He took Sakai with him when he remarried for a second time, and it was with this step-mother (62) that Sakai went on the run after her husband’s arrest.

• Actor Yamamoto Yoichi (40, photo bottom right) is said to have “miraculously” recovered from his recent heart failure. Having visited a local clinic on August 7, he was diagnosed with mild pneumonia and given medicine. However, when his condition didn’t improve, he visited a larger hospital two days later, where he was rushed to intensive care and treated for fulminant myocarditis. The uncommon condition is an inflammation of the heart muscle, caused by infectious agents, toxins, drugs or for unknown reasons. It can require aggressive treatment, even including a heart transplant. But Yamamoto has already recovered to the point where he is in a regular hospital ward and has begun rehabilitation. He will continue top be observed for any side effects on his liver or kidneys.