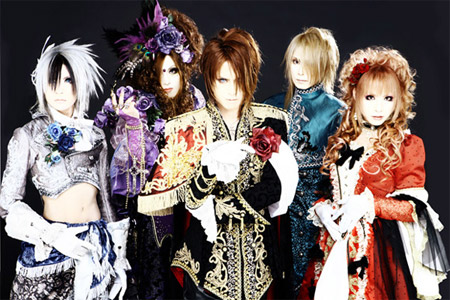 Jasmine You, bassist with the Japanese visual rock band Versailles, has died. His death was announced on the website of the band’s management agency late Sunday night, though no details were given. The band, made up of Jasmine (photo, 2nd from left), Kamijo (vocals), Hizaki (guitar), was formed in 2007 and they were later joined by Teru (guitar) and Yuki (drums). Through videos posted to YouTube and an English page on MySpace, they developed a growing fan base in the U.S. before finding any success at home. They made their major label debut with their fifth single “Ascendead Master” in June but had postponed any engagements in support of the release due to Jasmine’s health problems. Warner Music Japan has not yet said how his death will affect the planned September release of an album. Due to a conflict over use of the band’s name, they are known as Versailles – Philharmonic Quintet in the United States.

Actress Sakai Noriko (38) may escape trial for drug possession due to a lack of conclusive evidence. Sakai’s disappearance for 6 days following the arrest of her husband on August 3 meant that the urine test for traces of methamphetamine was basically too late (the drug usually clears the system in about 4 days). And the amount of the drug found at her Tokyo home was miniscule. Police found paraphenalia with Sakai’s DNA but only 0.008g of meth, whereas the amount for a single hit is around 0.3g. Her husband, Takaso Yuichi (41) has said he bought the drug from a foreigner and that his wife has been a user since last summer. Sakai said she started on the urging of her husband but has used only a few times in the last year. Legal experts have said that the evidence as currently reported is probably not enough to build a court case, and Sakai may well received a suspension of indictment. Actor Nakamura Shunta is a recent example of a first-time drug user who received similar leniency. The son of actor Nakamura Masatoshi (58) and actress Igarashi Junko (56) was arrested in April for possession of 0.03g of marijuana.