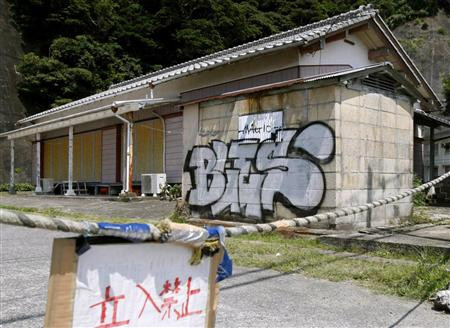 Sakai Noriko’s husband has been re-arrested in the couple’s ongoing drug case. The new arrest follows the discovery of amphetamines at Takaso Yuichi’s villa in the Chiba Prefecture beach town of Katsuura. It will likely lead to a stiffer prison sentence and puts extra pressure on Sakai to come clean. It has become increasingly clear that she was trying to destroy or conceal as much evidence of her drug habit (avoiding a urine test, cutting and dyeing her hair, destroying her mobile phone) before turning herself in to police several days after they issued a warrant for her arrest. Since that time, her statements to police have conflicted with those of her husband, who was arrested six days before her. Though the couple have been living separately for some time, they continued to share their drug habit. Sakai has admitted that they did drugs on their visit to Amami Oshima island last month to watch the solar eclipse, a trip on which they were accompanied by their 10-year-old son. Sakai is known to have visited the Katsuura home several times. The house, which has become a tourist attraction, was painted with the obscure grafitti “BLES” over the weekend.

• Veteran rock ‘n’ roller Uzaki Ryudo (63) is likely to face prosecution for causing a minor traffic accident at the weekend. Uzaki was driving in the Tokyo suburb of Setagaya on Sunday evening when he into the back of a car waiting at a traffic signal. Two women sitting in the rear of the car suffered minor neck injuries.