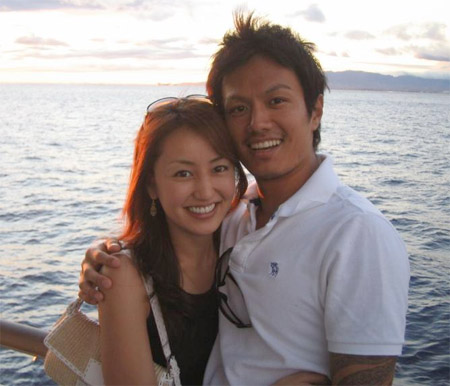 Not only is actor Oshio Manabu facing likely jail time, but there won’t be a wife tying yellow ribbons for him while he’s inside. Actress Yada Akiko (30) yesterday faxed a statement to the media saying she had filed for divorce from Oshio (31), less than a week after his arrest for drug use. The couple had been separated for about six months and Yada acknowledged that the reasons included Oshio’s extra-marital affairs, their “incompatible values,” and the ongoing effect on her son and other people around her. There have been reports that the woman whose death is at the center of the ongoing investigation, rather than pursuing Oshio for his fame and money in fact felt she was being stalked by the bad-boy actor and musician. Her family and friends, who attended her funeral during the week, have expressed their anger at Oshio’s seeming refusal to take responsibility for her death. The media has also been critical of his statements to police, in which he has insinuated that the woman coerced him into taking MDMA (ecstasy) and that it was the advice of an acquaintance that made him abandon her body in the luxury Roppongi apartment where she died, naked on a bed. In her statement yesterday, Yada apologized for her ex’s behavior but said she was not ready to speak to the press in person. The couple married in November 2006 and had a child the next year.