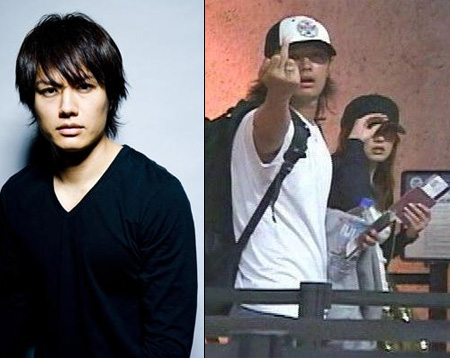 It looks like talento Oshio Manabu (31) has got himself caught up in a very serious matter. Avex Management announced yesterday that they had cut him loose, saying only that he had broken the terms of his contract. It was later revealed that he has been arrested by Tokyo police for drug use and possible involvement in the death of a woman. Police at the Azabu station, responding to a call on Sunday night from a Roppongi Hills apartment building, found a naked woman dead on a bed. They are questioning the caller as well as Oshio, who is described as connected to the apartment. A urine test on Oshio gave a positive result for MDMA, better known as Ecstasy. He said he had received the drug from a friend but had taken it without realizing it was illegal. Oshi made his acting debut in 1998 and quickly developed a fan base through his roles in popular TV dramas. With a career that jumps erratically between acting and music, Oshio is mainly known these days for his 2006 marriage to popular actress Yada Akiko (30, photo right) and his surliness with the media. In May of last year he joined Avex, saying he was aiming to make it as an international actor. But the beginning of this year saw him revive his rock band LIV, who were supposed to be releasing an album within the year.