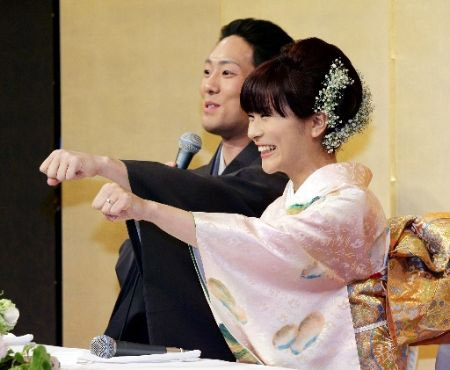 Young kabuki star Nakamura Kantaro (27) and actress Maeda Ai (25) got formally engaged yesterday at the Hotel Okura in central Tokyo. Among those in attendance were his father, Kanzaburo (53), grandfather Shikan (81), and younger brother Shichinosuke (25), all kabuki actors, and aunt Namino Kuriko (63) who is also an actress. Though his mother Yoshie is not an actress, she is also from a top kabuki family. After the traditional engagement, the couple held a press conference and announced that they would hold their wedding ceremony and reception at the same venue on October 28. Nakamura wore a gray kimono, while Maeda’s pink kimono was the same one that Yoshie wore when she got engaged. The two have dated since they appeared together in the 2001 NHK drama “Hikari no Teikoku.” They first acknowledged their relationship and talked of their marriage plans back in January. Asked if she planned to give up her acting career, Maeda said, “As long as it doesn’t affect his work, I hope I can continue.” As kabuki is a family business, there were the inevitable questions about children. Nakamura said, “I don’t want her to be under that kind of pressure. But having said that, I’d like to have about three children.” One of the unusual things about this particular kabuki family is that their real name is Namino, but Yoshie’s maiden name was Nakamura. So her name legally changed to Namino when she married, but due to her husband being part of the Nakamura-ya stage family, she is still known by her original name.

• Actor Abe Tsuyoshi (27) today announced that he has married Chinese actress Shi Ka. The couple met on the set of a joint Chinese-Taiwanese movie in 2006. Born in China, Abe moved to Japan when he was 9 and later took Japanese citizenship and the family name of his grandmother. He continues to work both in Japan and in the Chinese language world, where his stage name is Li Zhendong. He made his breakthrough in Japan in the popular TBS drama series “Hana Yori Dango” in 2005, and also the follow up series and big screen spinoff. His new bride is based in Beijing, so Abe will go solo at a press conference scheduled for today.

• On Saturday night, Katori Shingo (32) was the first member of SMAP to speak publicly about last week’s arrest of Kusanagi Tsuyoshi (34) on public indecency charges. On his live TV Asahi show “SmaStation!!” he choked up several times as he apologized on behalf of the group and said he hoped to see his best friend back at work as soon as possible. After having spent Friday night at a hotel in the capital, Kusanagi is said to have returned to his apartment for the first time since the incident.