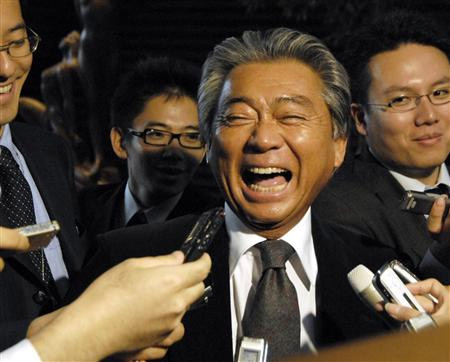 Veteran emcee Mino Monta (64, profile) likes to speak his mind. But a comment he made on a live morning show yesterday drew an apology from the TBS network. The topic was the upcoming visit by former Russian leader Vladimir Putin in May and how the Japanese government may be expected to help support the struggling Russian economy. Mino quipped, “We could just buy the Northern Territories!”, referring to the islands between Hokkaido and Sakhalin. The dispute over their ownership has kept the two countries from ever signing a WWII peace treaty, and is a popular rallying cry for right-wing extremists. Mino’s comment was clearly a joke, but his fellow presenters just stared awkwardly at the floor. A TBS spokesperson said, “The comment was not Mino-san’s true opinion, but it was an inappropriate choice of le kamagra.”

• Movie studio Shochiku has announced that it is bringing an end to the long-running series “Tsuri Baka Nisshi” (Fishing Fool Journal). Starring Nishida Toshiyuki (61) as Hama-chan and Mikuni Rentaro (86) as his equally fishing-mad boss Suu-san, the manga adaptation has been a movie theater institution since 1988. It was first shown as a support feature to the even longer-running “Otoko wa Tsurai Yo,” with which it has much in common. And when that series came to an end following the death of its star Atsumi Kiyoshi, Tsuri Baka took over as Japan’s “kokuminteki” (national) movie. The last movie in the series, the first to be set in Hokkaido, is due for release on December 26 and will be called “Tsuri Baka Nisshi 20, Final.” There will be guest appearances from Matsuzaka Keiko (56), Fukiishi Kazue (26) and Tsukamoto Takashi (26). A Shochiku producer says that the studio decided, along with Nishida and Mikuni, several years ago to wrap up the series at 20. Though both actors have had health problems in recent years, he denied that was behind the decision.