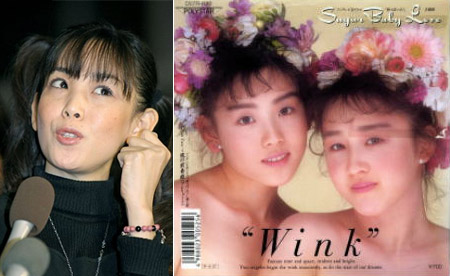 Former pop singer Suzuki Sachiko (40) seems a bit embarrassed about yesterday’s media reports of an attempted suicide. One half of the top 80s/90s idol duo Wink, she gave a quickly-arranged press conference last night to address news reports that she had been rushed to hospital after a suspected drug overdose on Sunday. Speaking to reporters at the TV Asahi studios in Tokyo, she started by saying “I was more surprised than anyone by yesterday’s news. As you can see, I’m fine. I apologize for having caused such concern.” She said that she is naturally a night person and has been taking prescription sleeping pills for the last two years. Unable to sleep on Saturday night, even after taking her pills, she stayed up all night. The next morning she had a long telephone conversation with a friend until exhaustion finally caught up with her and she fell asleep while still on the phone. Alarmed, the friend called for an ambulance and Suzuki says she was awoken by the sound of banging on her front door. She let the paramedics in and was able to walk to the ambulance. She was admitted to a hospital, where she was told she was anemic and in need of rest, and put on an I.V. She stayed the night and checked out Monday morning. Suzuki said, “I live alone, so I eat out a lot. From now on I’ll try and look after myself a bit better.” Her former singing partner, Aida Shoko (39) got married to a doctor last July. Wink split up in 1996 and performed together for the first time in a decade last December when they gave a one-off performance at the 50th Nihon Record Taisho awards.

• Renowned supporting actor Kaneda Ryunosuke died of chronic kidney failure late at a Saitama Prefecture hospital on Monday night. He was 80. Kaneda made his stage debut at the age of 5 but didn’t have the first of many movie roles until 1968. In recent years he appeared in such TV dramas as “Tokyo Tower” in 2006 and the “Bayside Shakedown” spinoff movie “Koshounin Mashita Masayoshi” (Negotiator, 2005). He had been suffering from diabetes for the last few years and was admitted to hospital in late March with a leg injury.

• Comedian Akiyama Ryuji (30) of the trio Robert recently got married, it was revealed yesterday. He has been frank about his relationship since it was exposed about a year ago on the comedy show “Haneru no Tobira.” It was during filming of today’s special 300th edition of the show that he announced the happy news.