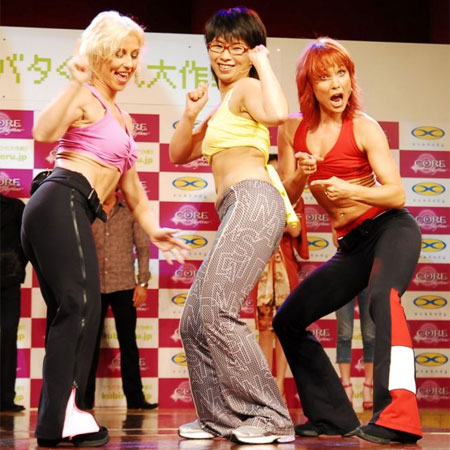 Contrary to her image of having no love life, comedienne Kuwabata Rie (33) is getting married, it was revealed on Monday. Her future husband, who’s an employee of a car parts manufacturer in Chiba prefecture, proposed to her on the new NTV show “Majotachi no 22ji” last night. The bespectacled half of the duo Kuwabata Ohara, the comedienne has been in the spotlight in the last year due to her promotion of Core Rhythms and a book she published based on her success with the fitness/diet program. She slimmed down from 63kg to 56.5kg after practicing the rigorous dance program for six weeks. She said back in February that she was taking part in “go-kon” (mixer parties) once a month in the hope of finding a romantic partner. But actually she met her fiance 12 years ago when they worked at the same part-time job. Their relationship hit the rocks once but they started dating gain three years ago. On last night’s show, her comedy partner Ohara Masako (33) revealed that she recently split up with her boyfriend.

• Once step ahead in the marriage race is NTV announcer Yamamoto Maiko (30), who got married yesterday to a 31-year-old director in Fuji TV’s drama department.

• Sadder news about a couple of other middle-aged celebrities of yesteryear. Former NTV announcer Ogiwara Hiroko died of cancer on Sunday. She was 54. And former talento Shimizu Yukiko was found to have committed suicide yesterday. She was 49. The body of a woman was found in the Omikami cemetery in Oyamacho, Shizuoka Prefecture yesterday afternoon and personal ID found on the body was that of Shimizu, whose father is buried in the cemetery. Police gave the cause of death as suicide from hydrogen sulphide poisoning. Shimizu debuted in 1977 after winning the “Star Tanjo” audition show. She went on to appear in many variety shows, dramas and movies. Her management agency said she quit in March 2006 in order to look after her ailing mother.