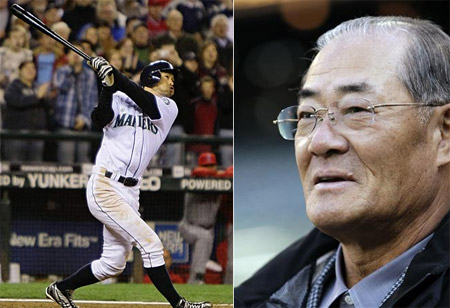 Plaudits have been coming in from the show business for the latest feat by baseball superstar Ichiro (35, profile). The Seattle Mariners leadoff batter equaled the record for career hits by a Japanese player yesterday, with the record holder Harimoto Isao (68, active from 1959-81, photo right) watching in the stands. And with typical aplomb, Ichiro’s 3,085th, 7th-inning hit was a grand slam home run that helped seal an 11-3 victory over the visiting Los Angeles Angels. What made it even more remarkable was that it was his first game of the season after a bleeding stomach ulcer had landed him on the disabled list for the first time in his Major League career. The win propelled the Mariners to 7-2, the best record in the majors and a far better start than expected after their recent terrible seasons. Ichiro was already riding a huge wave of popularity after helping Japan defend their title at the World Baseball Classic last month. Regarded as the best batter of his generation, Ichiro has many celebrity friends and they all wanted to congratulate him on yesterday’s achievement. Enka singer Ishikawa Sayuri (51), whose “Amagigoe” plays every time he steps up to the plate, said, “I heard the news during rehearsals and started clapping. And to do it with a grand slam home run – he really is loved by the baseball gods.” Veteran actress Mori Mitsuko (88) said, “He has set the kind of records that you need to live to my age to reach. I’m just honored to be living in the same time as him. Long time friend and enka singer Koda Shin said, “He’s really aging well, isn’t he? As younger men, we used to go to yakiniku restaurants or karaoke. Now he’s an inspirational team leader.”

• Singer Inagaki Junichi (55) announced yesterday that he got remarried last year. He and his bride (45) tied the knot at a shinto shrine in Kyoto in October and held a reception in Tokyo last month. Inagaki’s first wife died in 2006.