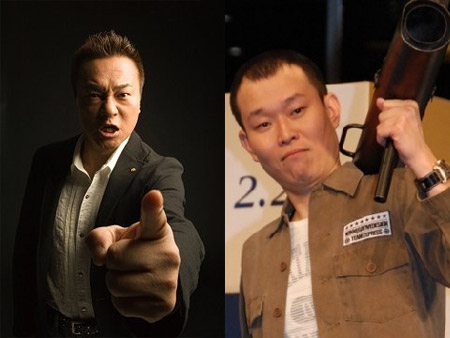 It seems that the frank nature of Kansai comedians just keeps getting them into trouble. Popular talento Kitano Makoto (50, photo left) has been taken off the air indefinitely, according to his Shochiku Geino management agency. The specific reason has not been made clear but it is believed to have been something he said on his long-running radio show “Makoto no Psychic Seinendan.” The show was abruptly taken off the air last month, three weeks earlier than scheduled, after a run of 21 years. A regular on several TV shows, in each case Kitano has either already made his final appearance or will not be renewing his contract. A popular celebrity for the last two decades, his mouth has often gotten him into trouble. One famous incident was in 1993 when his scathing comments about a nude photo book published by Yamamoto Linda (58), a popular singer but well past her prime, led to a ¥100-million slander case.

• Meanwhile, it looks like the “when in Rome” adage doesn’t apply to TV celebrities indulging in drugs. The Ministry of Health and Welfare’s narcotics control department in the Kinki district announced last Friday that it issued a formal warning to the Osaka-based Asahi Housou TV network over a segment aired back in January. The “Sekai no Mura de Hakken!” show featured comedian Chihara Seiji (39, photo right) on a visit to Bolivia. At one point he stopped and asked the lady at a street stall, “Is this coca leaf?” and then tried chewing some. The scene even featured subtitles that made it clear what it was he was chewing on. Though the Bolivian government actively supports the plant’s agriculture – president Evo Morales, a former coca growers union leader, says that “coca is not cocaine” – it is strictly illegal in Japan. A TV Asahi spokeserson said, “We were trying to reflect the different culture of a foreign country, but we should have been more prudent.” The network has checked that none of the program’s staff brought coca leaves back to Japan. And if a repeat of the show is broadcast, the offending scene will be cut.