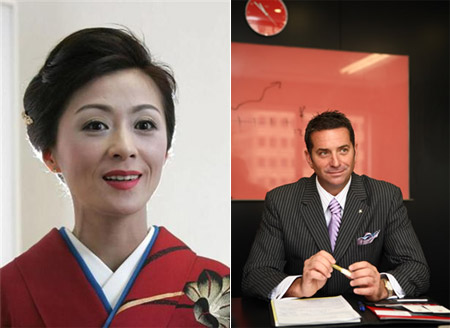 Enka singer Nagayama Yoko (41) revealed on her blog yesterday that she has married an American businessman. She said that she and Skillhouse Staffing Solutions CEO Mark Smith (40) tied the knot on Monday morning. But she reassured fans that she plans to continue her music career. The two first met in September 2006 through the TBS Shimada Shinsuke-hosted variety show “Sekai BariBari Value.” The show sometimes features a segment with single Japanese female celebrities being matched up with wealthy foreign businessmen. Smith, who has been in Japan for 15 years and is a fan of enka, took a liking to Nagayama and they soon hit it off. Their marriage fits neatly under the recently popular heading of “arafo-“, abbreviated from “around forty” and referring to people in that age group. A popular enka star, Nagayama is a rarity in that she started out in 1984 as an idol singer. She switched to the more traditional enka in 1993.

• A couple of popular talentos are in the hospital this week. Comedienne Minowa Haruka (29) of the duo Harisenbon has been hospitalized with pulmonary tuberculosis. She was admitted on April 3 and is expected to be in hospital for about two months. As her condition is highly contagious, Tokyo authorities have been asking anyone who thinks they may have contracted the disease at a TV studio or theater to come forward. Meanwhile “okama” (effeminate gay man or drag queen) beautician Ikko is under doctor’s orders to rest for at least a week after being diagnosed with pneumonia. The cause was said to be her overly hectic work schedule. Several dates on an upcoming concert tour have been postponed until the summer.