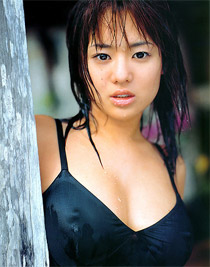 There has been a furor in the Chinese media about a planned event in the city of Guangzhou featuring some of Japan’s top porn actresses. The problem is that the event itself seems to have been a work of pure Web fiction. Several Chinese newspapers published stories about the heated discussions happening on the Web, with citizens protesting the location and timing of the event. It was to take place near a memorial to Chinese who died in the Sino-Japanese War and on the eve of an important anniversary. Others Web posts talked about how the event, to be held at a bar in the center of the city, was reasonably priced compared to similar events in Hong Kong. The newspapers said that protests against the event has reached such a level that it had to be canceled. Hong Kong’s Singtao Daily named two of the actresses, which only served to bring more attention to the story. But spokespeople for “AV” actresses Aoi Sora (25, photo) and Matsushima Kaede (26) said they had never even heard of the event let alone received an invite to China. Aoi said on her blog that she was furious that her name and photo had been abused on the Web. “But it has taught me that there are the same prejudices against adult entertainment overseas (as in Japan),” she said.