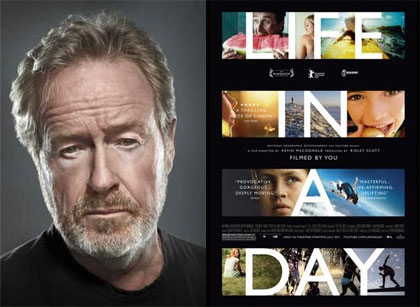 It was announced yesterday that Fuji TV are teaming up with the Hollywood director brothers Ridley (74) and Tony Scott (67) to make a documentary feature on life one year after the Great East Japan Earthquake and tsunami. The film, expected to be released overseas this autumn, is in the style of Ridley’s 2011 project “Life in a Day.” That film used footage shot by thousands of amateurs in 192 countries and uploaded to YouTube. It was described as “a historic cinematic experiment to create a documentary film about a single day on earth” (see trailer below).

The Japan project has seen the distribution of 200 cameras to people in the western part of Tohoku, worst hit by last year’s natural disaster. On March 11, they will film themselves and the world and people around them, and contributions are also welcomed from outside Japan. Submissions can be uploaded to YouTube between March 11-25. The idea for the film was proposed to Scott by Fuji TV chief producer Hayakawa Takayuki, a native of Sendai in Miyagi Prefecture. A percentage of the box office from the movie will be donated to relief efforts in Tohoku.