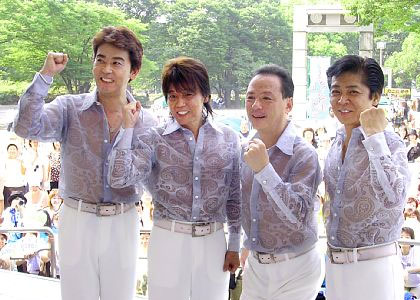 Japan lost one of its first – and most controversial – aidoru stars yesterday as former “Four Leaves” leader Kita Koji (photo, 2nd from left) died of liver cancer at a Tokyo hospital. He was 63. He is survived by a wife and 13-year-old daughter. He had been undergoing immunization treatment against the disease since it was diagnosed in May of last year, but kept the cancer secret from all but his closest family and friends.

Real name Matsushita Koji, Kita was an Olympic hopeful gymnast in his youth. But economic reality forced him to try a variety of jobs before being bitten by the showbiz bug. He became a roadie for the early Johnny’s Jimusho group Three Funkies in 1964 and followed the group from Osaka to Tokyo. Two years later he was scouted by Johnny himself and Four Leaves was formed, with Kita’s stage gymnastics bringing a whole new dimension to the pop music of the time. The group made their recording debut in 1968 and became the first in a chain of successful singing and dancing Johnny’s aidoru groups that continues to this day. One period when aidoru groups went into decline was the late 1970s and that led to the breakup of Four Leaves in 1978 and Kita leaving Johnny’s Jimusho the following year. Kita later revealed that the decline in his career was compounded by years of stimulant drug addiction that led to his arrest in 1979.

Years of drifting in and out of showbiz were followed by the publication of a book, “Hikaru Genji e,” in 1988 that was a scandalous expose of Johnny’s Jimusho and portrayed Johnny Kitagawa (80) as a sexual predator on the young boys under his charge. The next few years would see a lot more of this kind of revelation, although by this time the company was so powerful in the showbiz world that the stories were largely ignored by the mainstream media. Kita – by now married three times – mellowed somewhat in the mid-1990s and Four Leaves finally reformed in 2002. They performed regularly until the sudden death of Aoyama Takashi in 2009. 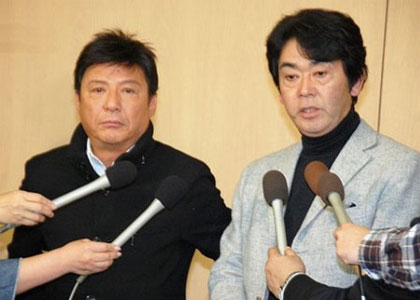 Kita continued to update a blog until his death. His management agency posted the news of his passing on his blog yesterday, along with his final entry dated Tuesday. In it he said he’d had a happy life and asked fans not to grieve for him. He signed off by poignantly addressing Johnny Kitagawa and his sister Mary: “Thank you. I’m grateful to you.” Speaking to reporters yesterday fellow Four Leaves member Orimo Masao (58, photo right) said that he learned of it only at the end of last year when he visited his old friend in hospital, while Egi Toshio (59, photo left) said he knew nothing until the end of January.