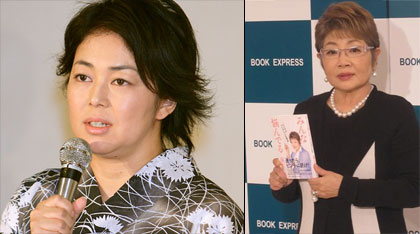 Troubled comedienne Nakajima Tomoko (40) is now officially unemployed. As we reported here at the end of last month, Nakajima is currently being sued for millions of Yen in unpaid rent on her apartment and office and hasn’t appeared on TV for almost a year. The first hearing on the case was held at the Tokyo District Court on February 14 but neither Nakajima nor a representative showed up. A decision in favor of the real estate company is expected on the 28th of this month.

But although she wasn’t working or getting paid, Nakajima was still officially listed as a presenter on four regular variety shows. It was revealed yesterday that her management agency recently agreed with NTV and TBS that she would formally step down from her two shows on each network.

One half of the comedy duo Othello, Nakajima is said to be sharing her apartment with a female fortune teller who dictates her every move. One celebrity friend who recently visited her said that she has been turned against her comedy partner Matsushima Nahomi (40). “I don’t even want to see her face,” she reportedly said.
Related stories:
Money Problems No Laughing Matter (Jan. 31, 2012)

Pinko Sees Red
Actress Izumi Pinko (64, photo right) seems to have forgotten that she got her showbiz start as a young entertainment news reporter. At a press conference to launch her new book “Minna Nayanderu” (Everyone’s Got Problems) she was her usual jokey self until one young female reporter dragged up an unpleasant memory. When asked if she ever meets the child born from her husband’s extra-marital affair, Izumi lost her rag and ended the conference, spitting, “I don’t want to talk to this brat! Why should I have to speak to her?” Izumi and her husband (62), the head of a clinic in Tokyo, have been married since 1989. The scandal that almost led to divorce happened in 1995 when he admitted that he had fathered a baby with another woman.

Following an expose by the highly regarded Environmental Investigation Agency of whale and cetacean products sold through Amazon Japan, a wholly owned subsidiary of Amazon Inc, we here at Japan Store have decided to no longer purchase anything from Amazon until the company imposes a ban on such products.

Not only do we object in principle to the sale of such products and the unnecessary hunting of dolphins, whales and other cetaceans, but scientific analysis of the meat being sold reveals that it consistently contains levels of toxins far exceeding the safe levels dictated by the Japanese government. And these products often contain meat from endangered and protected cetacean species, or meat that is not specifically identified and is likely to be dolphin or porpoise.

I should mention that unfortunately Rakuten also has thousands of listings for whale and cetacean food products – almost 2,800 if you search for 鯨 (whale) and almost 1,200 if you search for 鯨肉 (whale meat). While Japan Store is not affiliated with Rakuten, we do source some of our products there and a boycott of the service would have a serious impact on the operation of this store.

And for the record, Yahoo! Japan also sells these products.

Update: It’s only been half a day since I posted this blog entry and the news just came in – Amazon Japan have removed all whale and whale-related food products from their online store. It remains to be seen if this will be a permanent move and whether Amazon Japan will issue a formal policy statement. But still, wow! Social media pressure rocks!