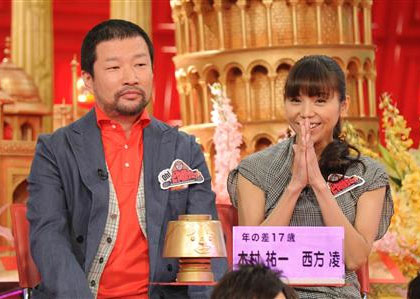 Popular talento Kimura Yuichi (48, photo left) has announced the date of his upcoming fourth wedding. He and actress Nishikata Ryo (31, photo right) revealed that they will tie the knot on May 8 during a recording of tonight’s TV Asahi variety show “Oh! Doya Kao Summit” featuring couples with a wide age difference. The pair have been an item for some time and we reported on media speculation about their marriage as far back as April 2009. They appeared on TV together for the first time last November and Nishikata spoke of how she had proposed marriage several times to no avail, but then said they were thinking of getting hitched this spring. Kimuni, as he popularly known, has been down the aisle three times before, most recently with actress Henmi Emiri (35) in 2006, a marriage that lasted just two years.

Kimura gave Nishikata her first movie acting role in his own directorial debut “Nisesatsu” in 2009 and she also had a role in his second feature, “What a Wonderful Life!!” in 2011. But Kimura’s movie career so far has failed to make as much impact as that of his Yoshimoto Kogyo comedy stablemate and close friend Matsumoto Hitoshi (48).
Related stories:
A Fresh Start for Kimura Yuichi (Apr. 16, 2009) 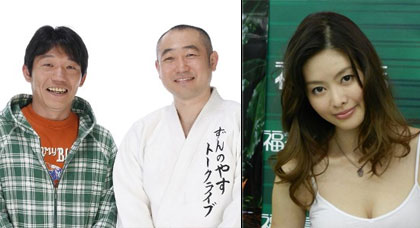 Police Investigate Comedy Stunt Gone Wrong
Police are investigating whether to initiate criminal proceedings following a serious injury suffered by a comedian during filming of a variety show. Yasu (42, left photo, right), of the comedy duo Zun, broke a bone in his back while filming an episode of the Tunnels-hosted show “Tunnels no Minasama no Okage Deshita” yesterday evening at the Joetsu International Ski Resort in Niigata Prefecture. He was on the ski slope in an inflatable rubber boat and lost control, crashing into a building. Police were on the scene this morning to look into what safety precautions were in place and decide if it should be dealt with as a case of professional negligence resulting in injury.

Actress Reveals Marriage to American
Actress and pinup model Yoshino Sayaka (29, right photo) posted to her blog yesterday that she has been married for almost a year and a half. She described her husband as a 30-year-old American ippanjin. She said they have known each other for about ten years and tied the knot on September 19, 2010. She explained the late wedding announcement by saying the marriage was closely followed by the death of her dog(!) and then the March 2011 Great East Japan Earthquake.