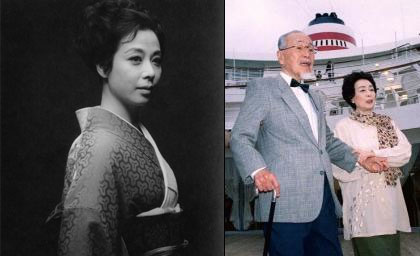 Veteran actress Awashima Chikage died this morning of pancreatic cancer at a Tokyo hospital. She was 87. With almost 100 movie roles to her credit, she was best known for her role in the 1955 movie “Meoto Zenzai” and was considered one of the great beauties of postwar Japanese cinema. Her most recent work was the 2010 movie “Haru’s Journey.”

Born Nakagawa Keiko in Tokyo in 1924 she was a graduate of the all-female Takarazuka theatrical troupe. After leaving she joined the Shochiku movie studio and made her big screen debut in 1950 in Shibuya Minoru’s comedy “Tenya Wanya.” With her light and breezy style she created a whole new category of actress in such such satirical comedies as “Jiyuu Gakko” and “Honjitsu Kyuushin.” In 1955 she teamed up with Morishige Hisaya, one of the biggest stars of the era, and played the role of a geisha in the Toyoda Shiro film “Meoto Zenzai.” The role was her stepping stone to major fame. She later reunited with Morishige in the so-called “Ekimae” movie series and finally in 2001 as the central elderly couple in “Last Dance” (right photo).

The J-pop juggernaut that is AKB48 shows no signs of slowing down, though cracks are showing in the persoanl lives of its members. The latest single release from the female aidoru troupe, their 25th, is their seventh to top the 1 million mark in sales and the sixth in a row. “Give me Five!” made No.1 on the Oricon daily singles chart on February 14, almost broke the million barrier on its very first day of release and then obviously did so the following day. It is the first million selling single of the year. The so-called “graduation song” is aimed at those who will be leaving school or college in the coming month or so. It’s also the first single to feature AKB48 members in a band format, with Takahashi Minami and Maeda Atsuko on guitar and Ohshima Yuko (23) on bass (photo).

But Takahashi’s name was doing the rounds on the web for a very different reason last weekend when her mother was arrested for “obscenity” with a middle school boy – a story largely ignored by the mainstream media. This follows the recent expulsion of two members for the crime of hanging out with guys their own age after photos appeared online (see below).

Meanwhile, not to be outdone by their Tokyo sisters, the Osaka-based equivalent NMB48 also saw their latest release hit the top of the charts. Oricon’s single rankings for Feb 20 show that “Junjo U-19” is the group’s third single in a row to reach the No. 1 spot.
Related stories:
An AKB48 Scandal (Jan 31, 2012) 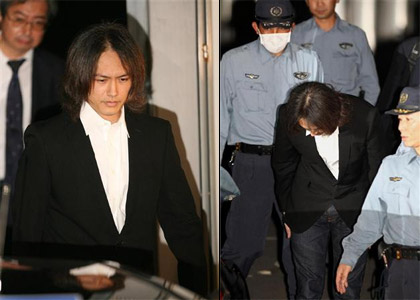 Oshio Manabu’s time in the court room is over and now he’s off to jail. Described these days in the J-media as a “former actor,” Oshio was at the No.1 petty bench of the Supreme Court yesterday to hear the decision on his appeal to the Supreme Court. Oshio was arrested in 2009 for his involvement in the drug-related death of Ginza bar hostess Tanaka Kaori at a luxury apartment in central Tokyo. He was originally arrested and tried for violations of the Narcotics Control Law and abandoning a person he was responsible for protecting, resulting in death. In the first ever trial of a celebrity under the recently introduced lay judge system at the Tokyo District Court, the most serious aspect of the charges – that Oshio’s failure to immediately call an ambulance when the woman lost consciousness led to her death – was dropped and a sentence of two and a half years was handed down. That sentence was upheld by the Tokyo High Court in April 2011.

Although he was caught bang to rights and his use of the synthetic drug MDMA, also known as Ecstasy, is not in doubt, Oshio has tried from the beginning to wriggle out of taking any responsibility in the case. Yesterday in a statement released through his defense lawyer he continued his defiance, saying, “The decision is extremely regrettable and unacceptable.” Apart from everything else, his arrest and trial led to divorce from actress Yada Akiko, who cited “incompatible values.”