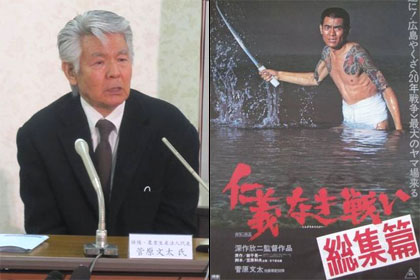 Veteran stoic actor Sugawara Bunta (78) announced yesterday that he has effectively retired from the movie business. He held a press conference after attending an event to honor firefighters and said that in the aftermath of the Great East Japan Earthquake in March 2011 he could no longer see any point in making movies. Last year he stepped down from the lead role in Yamada Yoji’s latest project “Tokyo Kazoku” and yesterday he spoke about how he and Yamada (80) had discussed the decision, “The director agreed with me.” Sugawara also revealed that he had been hospitalized in the winter of 2011, causing him to reevaluate his career. He is a native of Sendai City in Miyagi Prefecture, one of the areas worst hit by the quake and tsunami.

Sugawara has almost 200 movie titles to his name but, like his contemporary Takakura Ken (80), will always be best remembered for his roles in hard-boiled yakuza movies, particularly Fukasaku Kinji’s “Jinji Naki Tatakai” (Battles Without Honor and Humanity) series of the 1970s. In recent years he has done about one project a year, including voice roles for a couple of Studio Ghibli animations, but has not been a leading man on the big screen since 2003’s “Watashi no Grandpa.” He did leave the door open slightly for himself yesterday, saying that he is open to considering future projects on their merit.

Yamada’s movie, loosely based on the Ozu Yasujiro 1953 classic “Tokyo Monogatari” (Tokyo Story), had been scheduled to start shooting last spring, but due to the natural disaster that has been delayed until this year. It is now scheduled to start next week and no doubt it will have seen some script changes to reflect the much changed mood of post-3/11 Japan. The project recently lost actress Ichihara Etsuko (76), who stepped down as she is due to undergo surgery. Such are the risks of working on a project with a lead actors in their late 70s, I guess.
Related stories:
Ichihara Drops Out of Yamada Movie (Feb. 6, 2012) 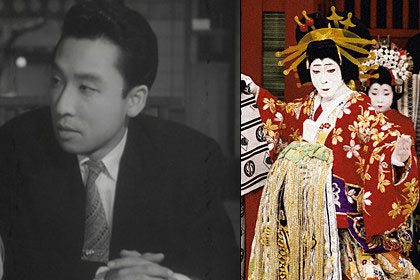 The world of traditional kabuki theater yesterday lost one of its great veterans. Nakamura Jakuemon IV, the oldest onnagata in kabuki, died of pneumonia. He was 91. Born in the 9th year of the Taisho era the eldest son of Ohtani Tomoemon VI, he took to the stage for the first time at the age of six using the name Ohtani Keitaro. He enlisted in the army in 1942 but soon after he reached the front line he was informed that his father had died when a regional theater collapsed during an earthquake.

After the war, he became an onnagata – an actor who specializes in female roles – and succeeded to his father’s stage name in 1948. But a couple of years later he switched to the big screen and as Ohtani Tomoemon VII became a major star until 1955. That year he returned to kabuki and was adopted by the widow of Nakamura Jakuemon III, who had lost her son and the heir to her late husband’s name during the war. In 1964 he succeeded to the name Jakuemon IV.

Jakuemon was the recipient of multiple cultural, Imperial and government awards and was named a Living National Treasure in 1991.