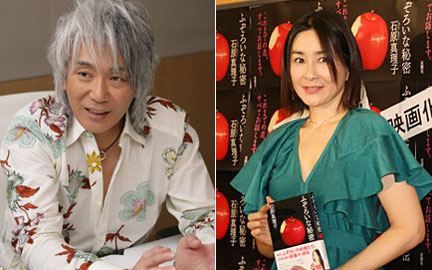 Singer Tamaki Koji (50) and actress Ishihara Mariko (45) have entered the latest stage of their long and bizarre relationship. They registered their marriage yesterday at the municipal office in the Denenchofu suburb of Tokyo, some 24 years after their relationship began. Back in the early 1980s, Tamaki was married but became besotted with the young Ishihara, sending her a set of red underwear as a sign of his love. Their affair was exposed in the media in 1985, and Tamaki divorced the following year but the couple broke up soon afterwards. Over the years, Ishihara had relationships with a host of celebrities, but largely disappeared from Japanese show business. She was back in the limelight in 2006, when in her autobiography she broke a showbiz taboo by naming many of those celebrities. About a fifth of the book was about her relationship with Tamaki, and she went into great detail about how she contemplated suicide when their affair was exposed. She also revealed that in February 1986 she was hospitalized for more than a month with a broken vertebra after he had beaten her. The book was later made into a movie. One of Japan’s most recognizable music stars, Tamaki formed the rock band Anzen Chitai in 1973, though it wasn’t until the early 80s that they had their major record label debut and achieved stardom.

• Former pin-up idol Komukai Minako has been found guilty on charges of drug possession and use. She admitted to the charges, allowing the judge to issue a speedy verdict at the Tokyo District Court today. She received an 18-month sentence, suspended for three years, and was in tears as she spoke briefly to reporters outside the courthouse.