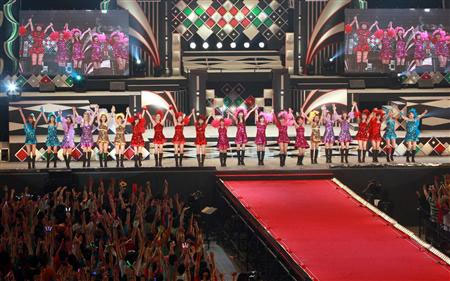 22 members of the Hello! Project troupe held an emotional “graduation ceremony” concert at Yokohama Arena yesterday. Among those leaving the nest are Matsuura Aya (22), Nakazawa Yuko (35) and Abe Natsumi (27). Amongst the huge troupe that has produced 78 idol singers, the first and most famous group is Morning Musume (profile), who held their debut concert at the same arena in 1998. Nakazawa and Abe were among that original lineup, which has changed countless times over the last 11 years. They have since gone on to other groups, such as Melon Kinenbi and Country Musume, or pursued solo singing or acting careers but have remained part of the Hello! Project. With the departure of the 22, the troupe’s average age drops from 18 to 15.

• Actress Kawashima Naomi (48) had a busy day yesterday, as she finally tied the knot. She flew into Tokyo from Thailand, where she was making a movie, and went straight to the Shibuya municipal office in central Tokyo to register her marriage to pastry chef Yoroizuka Toshihiko (43). Kawashima spoke with reporters after she finished the paperwork, saying she chose the February 1 as it was the anniversary of their first date. The couple had been engaged for over a year and filled in the paperwork on New Year’s Day. She said they plan to have a church ceremony and honeymoon in Tuscany, Italy in June followed by a lavish reception in Tokyo on June 23.

• Actor Sugawara Bunta (73) said on his Nippon Housou radio show yesterday that he recently won a battle against cancer. He was diagnosed with cancer of the bladder in 2007 and underwent radiation and chemotherapy treatment that allowed him to avoid having an organ transplant. He said he was delighted with the treatment, which led to a complete recovery and allowed him to continue working.