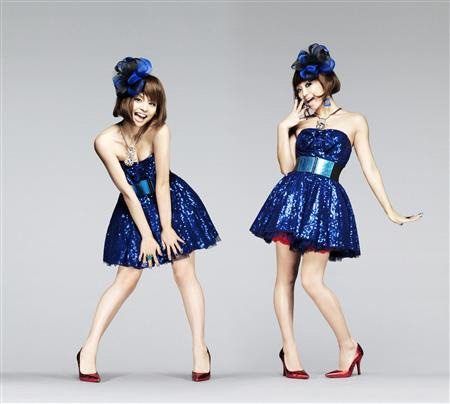 The J-pop sisters Koda Kumi (26, photo right) and Misono (24, photo left) are teaming up for the first time. They are scheduled to release a joint single, “It’s All Love” by chaku-uta download on February 25 and on CD in March and will be appearing on the music show circuit together. Though the younger of the two, it was Misono who first achieved popularity from her debut in 2002 until 2005 as vocalist with the group Day After Tomorrow. One reason for the breakup of the group was said to be Misono’s considerable weight gain, and she was then completely eclipsed by the success of her big sister. Kumi, who debuted in 2000 and had limited success in the club music scene, almost overnight became J-pop’s biggest seller in 2005 and again in 2006 with her upbeat dance numbers, regular TV appearances and “ero-kakkoii” (sexy cool) image. Misono started getting her career back on track in 2006, but more on the TV variety circuit than in music and she is now a regular on such shows as “Quiz! Hexagon.” Both sisters, who hail from Kyoto, clearly enjoy the limelight, share a raucous sense of humor and are said to be close. But they have only ever appeared on TV together once, on “Hey! Hey! Hey! Music Champ” last December, and have performed together only in private.

• Up and coming comedians are always glad to get a bit of extra publicity. So it’s no surprise that Kasuga Toshiaki (30) of the duo Audrey is making the most of a story in today’s issue of weekly gossip magazine “Friday.” The story includes photos of Kasuga and a young woman leaving his shabby Tokyo apartment, describing her as small and a bit chubby but beautiful. Kasuga insisted at a hastily arranged press conference late last night that they are still in the early stages of a relationship, which he fears may have been jeopardized by the magazine story. Audrey, made up of Kasuga and Wakabayashi Masayasu (30), made their breakthrough at the end of last year but are still living the life of struggling artists. In their skits, Kasuga has joked about living in an old wooden apartment building, in a single 6-tatami mat room with no bath. He says he washes using baby’s diaper wipes.