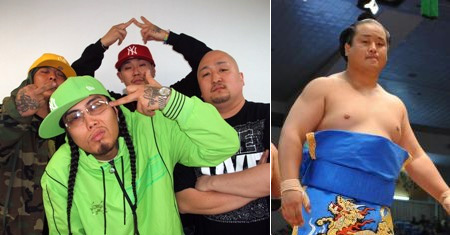 The leader of the popular hip hop group Nerimazafakka has been arrested for use and possession of cocaine. The arrest of group leader D.O (30, real name Sudo Shigeyasu) follows that of two other members and former sumo wrestler Wakakirin (25, real name Shizukawa Shinichi) for marijuana possession on January 30. Sudo, who says he has known the disgraced wrestler for the last few years, runs the “D Office” CD production company in Roppongi, central Tokyo where last week’s arrests took place. The area is home to many foreign embassies and a popular nightlife district for the ex-pat crowd, and is where the majority of reported drug arrests seem to happen. “I bought it from a foreigner in Roppongi” seems to be the standard phrase associated with such arrests. The group name Nerimazafakka is a pun based on the Tokyo suburb Nerima and the English slang “mother f@cker.” 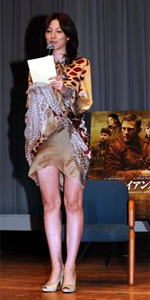 Talento Yamamoto Mona (32) just can’t seem to shake off that erotic image, as she showed a bit more skin than she planned at a PR event yesterday. On the comeback trail after an affair last year with a married baseball star almost derailed her career, she needs to avoid anything too scandalous. Her recent revelation that she’s in a serious relationship with a handsome – and single – property investor had the media speculating that maybe she’s ready to settle down. So the audience was abuzz when she was announced as a surprise guest at a preview screening of the movie “Defiance” in Tokyo yesterday. Starring Daniel Craig, it’s a WWII story about Jews banding together to resist the Nazis, a suitably serious theme for the new Mona and maybe why she wore a knee-length dress rather than the miniskirts she’s favored recently. But as she raised a sheet of paper to read out her speech, it got caught in her dress and flashed her shapely thighs. A practical joke by the gods of the entertainment world, perhaps. After the event, Mona was coy when reporters asked about her wedding plans and whether her boyfriend had proposed. But she made it clear that their relationship was headed in that direction.