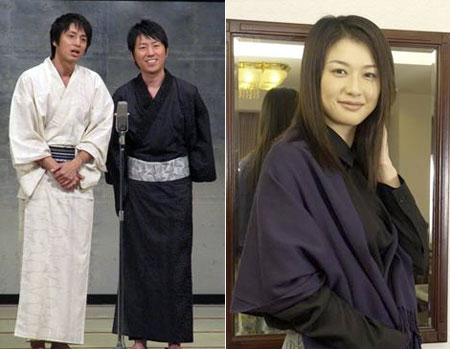 Comedian Tokui Yoshimi (33, photo left) and actress Natsukawa Yui (40, photo right) are an item, according to today’s issue of weekly magazine “Friday.” Tokui was spotted on several occasions visiting Natsukawa’s condominium in Tokyo at the end of January. Both the Yoshimoto Kogyo agency, which represents most of the country’s top comedy acts, and Natsukawa’s management have confirmed their relationship. One half of the popular duo Tutorial, Tokui has topped the rankings of most handsome male Yoshimoto star for the last three years and has been described as something of a playboy. But this is the first time for the agency to confirm such a rumor. The couple worked together for several months last spring on the Fuji TV drama series “Murina Renai,” in which they played a less than romantic pair. Rumors of a relationship started when they were spotted at a yakitori restaurant together in September, and those rumors were later confirmed by actor Sakai Masaaki (62). He had also appeared in the Fuji drama and said the pair were dating. But the media was already focused on a reported relationship between Tokui and popular badminton player Shiota Reiko (25) and the rumors about Natsukawa soon faded away. Then last week on the NTV “Shabekuri007” variety show, Tokui revealed that though had had asked Shiota to go out with him about two years ago, she had turned him down saying she needed to focus on preparations for the Beijing Olympics. Tutorial formed as a duo in 1998 but leaped to national fame in 2006 when they won the M-1 Grand Prix comedy contest. An accomplished actress, Natsukawa is one of the more private figures in Japanese showbiz.

• Former Judy and Mary vocalist Yuki (36) revealed yesterday that she is expecting a baby in May. Her first child, born in 2003, died of SIDS. She and her husband, Yo-King of the rock band Magokoro Brothers, had a second son in 2006. Judy and Mary were a major chart-topping J-pop unit from 1992 until 1999, with a brief revival in 2000-01.