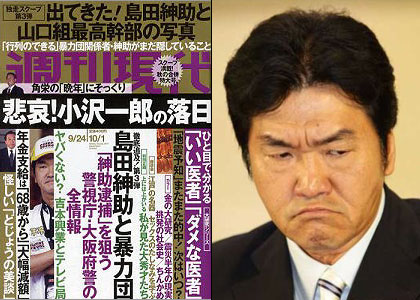 Earlier this week the Yoshimoto Kogyo talent agency and former star Shimada Shinsuke (55) filed a libel suit against the Kodansha publishing company and one of its editors. The lawsuit seeks a wide range of public apologies and ¥165 million in damages from the company and the editor of its “Shuukan Gendai” magazine. The weekly broke the story of Shimada’s underworld connections that led to his sudden retirement in August, despite his position as one of the most popular and highly paid stars of the Japanese TV world. At a press conference to announce his retirement, Shimada repeated several times that he would sue any weekly that published lies about him. In its October 3 issue, Shukan Gendai ran another story, this time with headlines like “Shinsuke, anta wa yakuzada” (Shinsuke, you’re a yakuza), referring to the star as “kyokudo no sekai no ichiin” (a member of the underworld) and claiming that he was involved in land deals with the major Yamaguchigumi criminal organization.

In addition to the financial damages, Yoshimoto say they have asked for printed apologies in newspapers and magazines as well as on the advertisements hung from the ceilings of train carriages. The company and Shimada have amassed a team of eight lawyers to fight the case. A Yoshimoto spokesperson said, “(Shimada was) a talento who really made a contribution. But it’s also true that he was disgraced.” Meanwhile, a Kodansha spokesperson retorted, “We have confidence in the content of our article. And we will continue to investigate the relationship between organized crime and Shimada.”

One question being raised now is why Yoshimoto are continuing to be connected with Shimada despite having severed contactual ties with him, in spite of his admitted yakuza connections, and particularly as the police have been cracking down on organized crime in recent months. The magazine article claimed that Yoshimoto were aware of Shimada’s shady connections when they made a contract with him, and if that turns out to be true, it totally undermines the company’s stated policy of being strictly against such relationships and could raise doubts about other top stars contracted to the agency. But the fact is that Shimada is a very connected person both in showbiz and beyond, with several side businesses, and he undoubtedly played a significant role in Yoshimoto’s ever-expanding business scope.