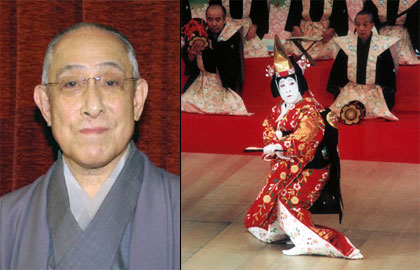 Kabuki star and National Living Treasure Nakamura Shikan VII died of lung failure at a Tokyo hospital on Monday. He was 83. On his deathbed he was surrounded by many of the “royalty” of kabuki, including his son Fukusuke (50), his son-in-law Kanzaburo (56) ad several grandchildren. Other veterans of the entertainment world who came to pay their respects after he passed away included movie director Yamada Yoji (80) and actress Nakamura Tamao (72). His funeral will be held at the Aoyama Crematorium on October 27 and will be led by Otani Nobuyoshi, chairman of Shochiku, Japan’s leading film and theater company

Shikan was the most famed onnagata of his generation, an actor who impersonates women in kabuki. He made his stage debut in 1933 at the age of 5 under the stage name Nakamura Kotaro IV and just months after the death of his father. In 1940, following the death of his grandfather – the famed onnagata Nakamura Utaemon V – he became a pupil of Onoe Kikugoro and the following year succeeded to the stage name Nakamura Fukusuke, which had previously been held by his father. He made his final name change in 1967. After receiving an award from the Japan Art Academy and the government’s Medal with Purple Ribbon, he was recognized as a Living National Treasure in 1996, and as a Person of Cultural Merit in 2006. In 2008 he was appointed as chairman of the Japan Actor’s Association. He made his final stage appearance as recently as September 1 at the Shimbashi Enbujo theater in Tokyo, but his poor health prevented him from appearing after that date.