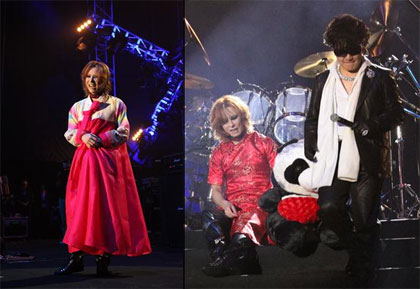 Rockers X Japan kicked off their first ever Asian tour on Friday, playing to 10,000 fans at the Seoul Olympic Gymnasium in South Korea. The venue was to host the band in March 2009, but that show had to be called off due to their legal battle with management. Band leader Yoshiki said, “It has been our dream to come here for a long time. (The late) Hide and Taiji also shared that dream.” The 10-song set included recent releases such as “Jade” and “Born to be Free” as well as standards like “Endless Rain.” As usual Yoshiki knew how to give fans that extra thrill, performing the folk song “Arirang,” sometimes considered the unofficial Korean national anthem, and dressing up in a pink traditional chima chogori.

Famous for their history of calamities and ruined plans, X Japan have already seen their share on this latest tour. A show scheduled for November 2 in Beijing was cancelled due to technical and production problems. And Yoshiki also managed to add a bit of unplanned drama to the Seoul show by badly injuring his finger on a cymbal. Nonetheless the tour headed to Shanghai on Sunday for its first concert on Chinese soil. This time around, Yoshiki played a Chinese folk tune, donned a red China doll dress and brought a stuffed panda on stage. Next up is Asia World-Expo in Hong Kong on November 4, followed by shows the same week in Taiwan and Thailand. 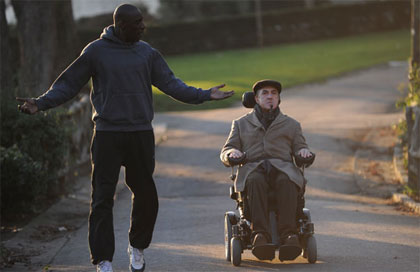 The 24th Tokyo International Film Festival came to a close last night. The big winner was the French film “Untouchables” which was awarded the Tokyo Sakura Grand Prix and $50,000. The film also saw its two male stars, Francois Cluzet and Omar Sy, share the Best Actor award. The film is based on a true tale of an aristocrat paralyzed after an accident, and the young black ex-convict employed as his care-giver. Another French winner was “When Pigs Have Wings,” which took the Audience Award. Director Sylvain Estibal said, “It is truly a great honor for us because this is our first time in Japan, our first movie, first film festival, and first award.”

Other people recognized were Ruben Oestlund, who was named Best Director for “Play”, and Glenn Close, who nabbed the Best Actress prize for her cross-dressing performance in “Albert Nobbs.” Local comedy “Kitsutsuki to Ame” (The Woodsman and the Rain), directed by Okita Shunichi and starring Yakusho Koji and Oguri Shun, was given the Special Jury Prize and S20,000. The Japanese Eyes award for local independent filmmakers went to Kobayashi Keiichi’s “Momo Iro Sora O” (About the Pink Sky). Jeffrey Jeturian was the first Philippino to win the Best Asian-Middle Eastern Film with “Trespassers.”

“Themes related to issues of immigration featured strongly in the films of the competitions, including Untouchables, Play and Pigs Have Wings,” pointed out jury president Edward R. Pressman at the closing ceremony at the Roppongi Hills complex in central Tokyo.