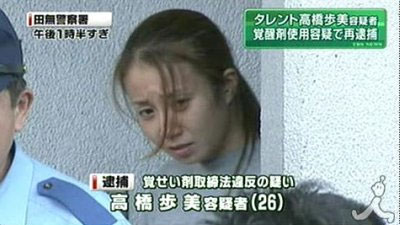 Former popular model and talento Takahashi Ayumi (26) has been found guilty on drug possession charges. At the Tachikawa branch of the Tokyo District Court today the judge handed down a two-year prison sentence, suspended for three years as is the norm for a first offense. Takahashi was arrested for possession of stimulant drugs on August 27, the same day her boyfriend (32) was arrested for his involvement in a traffic accident earlier in the year. He has been described as having ties to a criminal organization. Two days later police also found less than a gram of marijuana in Takahashi’s apartment in the Itabashi district of Tokyo. She said at the time that she had been using drugs for about a year.

In giving her judgement today, the judge said, “You fell under the influence of drugs. But now you are working steadily, so I will give you a chance to start over.” Takahashi has been a regular for such popular fashion magazines as “Popteen” and “Tokyo Street News” and appeared in TV commercials for several famous brands. She also had a role in the recent live action adaptation of the “Yatterman” anime. She quit her management agency about a year ago and started working as a club DJ.

Yoshimoto, Shinsuke Fight Back
Kimpachi Sensei Under the Knife