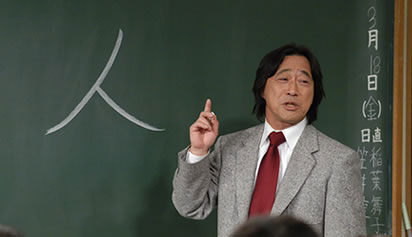 Popular actor Takeda Tetsuya (62) recently underwent heart surgery, his management revealed yesterday. The actor, best known for his long-running role as the philosophizing high school teacher Kimpachi Sensei, was hospitalized on October 13 and went under the knife on the 21st. He is expected to make a full recovery and leave the hospital early next month. He was diagnosed with arrhythmia (irregular pulse) about ten years ago and has been closely monitored since. His heart problem – aortic valve stenosis – resulted from a hereditary condition known as bicuspid aortic valve. It is caused when two of the three valves in the heart become fused together and it affects only about 1-2% of the population. Hollywood star and former California governor Arnold Schwarzenegger also had surgery for the condition.

A medical expert said, “(The condition) is rarely noticed while a patient is young. But as they get older and become less able to handle physical strain, they develop symptoms such as respiratory failure and hardening of the arteries and they become susceptible to heart attack.” Regarding Takeda’s treatment, he added “It is likely that they replaced the non-functioning aortic valve before his condition became too serious. It’s a big operation but is usually completed in 4 or 5 hours so I’m sure there is no cause for concern.”

Takeda played the title role in “3-nen B-gumi Kimpachi Sensei” on TBS for 32 years from 1979 until finally retiring the role earlier this year.