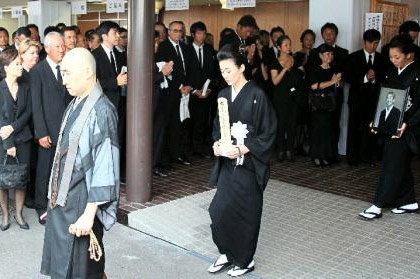 It’s been a tough week for popular actress Manda Hisako (53), who recently lost her common-law husband to cancer. Sasaki Chikara, CEO of the major apparel company Link Theory Japan, died of the rare scirrhous gastric cancer on August 9. He was 60. His funeral was held yesterday at the Aoyama Sogijo funeral hall in central Tokyo. About 2400 people were in attendance, including A-list celebrities and sports legends. Manda said, “We learned the name of the disease only in June, and from that point on I was praying it was just a dream. Even now, part of me wishes it was just a scene from a movie.” She added, “He was Superman to me, but now he’s dead. That’s something I and the children have to come to terms with.” During the funeral procession, New York-based trumpeter Hino Terumasa (68) played “When The Saints Go Marchin’ In” and “Furusato.”

Manda is a former Miss Universe Japan (1978) who made her acting debut on NHK in 1980, starting a solid career that included dozens of TV dramas, movies and commercials. Her relationship with Sasaki was first reported in February 1987 and caused a scandal as he was already married with a child. Manda gave birth to their first child in New York later that year. A couple of years later, Sasaki formally acknowledged the son as his own and got a divorce. It was reported earlier this month that Sasaki had another child with an unnamed woman.