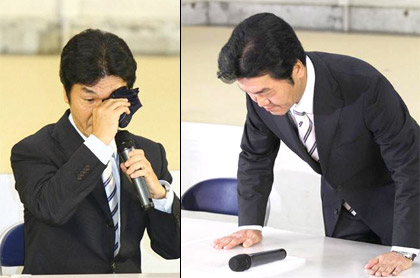 The Japanese entertainment world was rocked yesterday by the sudden retirement of Shimada Shinsuke (55), one of the country’s most talented emcees. This was no simple retirement, but came about due to revelations about the comedian’s ties with the yakuza, Japan’s criminal underworld. Specifically, during an investigation back in 2005 police found letters and photos that tied Shimada to one of the senior members of the infamous Yamaguchi-gumi yakuza organization. Over the following years, Shimada communicated with the crime boss by email, expressing concern following an arrest in Osaka for bid-rigging and even thanking him for wining and dining at his restaurant. When former boxing world champion Watanabe Jiro was arrested in 2007, information retrieved from his mobile phone also led police to Shimada’s shady connections.

At a hastily arranged press conference at the Tokyo offices of Yoshimoto Kogyo yesterday, Shimada said that retirement from showbiz was the only reasonable way forward for him, though he tearfully insisted that he believed he had not done anything wrong. He said that the trouble began more than a decade ago, when an on-air statement got him into trouble with a right-wing group and Watanabe and his Yamaguchi-gumi friends helped resolve the situation.

A skilled and funny presenter, Shimada was the anchorman for several regular variety shows and the networks went into a frenzy to try and make last-minute adjustments to their schedules. His various TV and other commercial contracts meant that sponsors also had to get to work withdrawing any ads featuring him. Shimada, who was involved in street gangs as a youth and has always had a rebellious image, has shown his darker side in the more recent past. His career was threatened back in 2004, after a female Yoshimoto employee made assault claims against him and took him to court. Several years later he was ordered by a Tokyo court to pay compensation to the woman.
Related stories:
Shinsuke Ordered to Pay for Assault (Sep. 22, 2010)