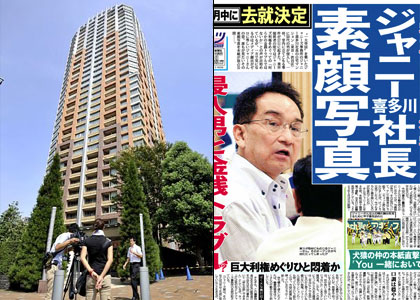 Johnny Kitagawa, the reclusive founder and head of Johnny’s Jimusho talent agency, spoke yesterday for the first time about the recent intrusion in his luxury, and supposedly highly secure, Tokyo home. Police arrested Unotoro Toshio (52), a man of unspecified employment from Setagaya district of Tokyo, on August 17 for unlawful entry into Kitagawa’s apartment in a luxury skyscraper in Shibuya.

Kitagawa said he returned to his apartment to get his mobile phone and the man followed him through the building’s auto-lock entrance. When he got to his apartment, he found the man hanging around outside his door. When he asked who he was, the man replied “Kitagawa” before barging his way into the unlocked apartment and locking Kitagawa out for about half an hour until police arrived. The pop culture mogul said he never felt in any physical danger. “It seems the man knew my apartment because he had been here before doing work on the telephone.” The media coverage of the story has led to a loss of privacy for the seldom seen Kitagawa, who says he would like to move, “if someone will lend me the rent.” As the head of an agency that represents many of Japan’s top-earning showbiz stars, it’s unlikely that he’s too stuck for cash.

Apartments in the building originally sold for as much as ¥710 million ($9.5 million).