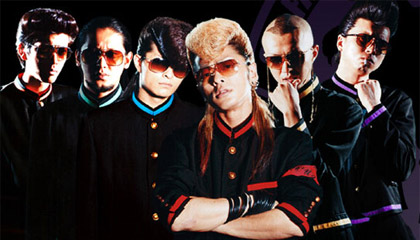 The popular “tsuppari rock” band Kishidan has drawn the ire of a leading Jewish human rights group with its ill-advised fashion sense. The Simon Wiesenthal Center, based in Los Angeles, has complained to the band and their management agency, Sony Music Artists Inc., about the SS-like uniforms they wore in an interview aired on MTV Japan on February 23.

Kishidan are not the types to take themselves too seriously and usually appear in the retro style of teenage bosozoku gangs, with coiffed hair and stylized school uniforms. But in a statement, associate dean of the SWC Rabbi Abraham Cooper said, “Such garb like the uniform worn by Kishidan is never tolerated in the mainstream of any civilized country outside of Japan. As someone who has visited Japan over 30 times, I am fully aware that many young Japanese are woefully uneducated about the crimes against humanity committed during World War II by Imperial Japan in occupied-Asia, let alone about Nazi Germany’s genocidal ‘Final Solution’ against the Jews in Europe.” He added, “But global entities like MTV and Sony Music should know better.”

In the last few years, band leader Ayanokoji Sho has used other personas, appearing as the commercially successful but controversial DJ Ozma, in the overtly commercial band FANTA, and even as a Las Vegas showgirl with comedy duo Tunnels.
Related stories:
Japanese Music Just Got a Bit Weirder (Mar. 11, 2010)
Tunnels, Kishidan Frontman are Yajima Biyoshitsu (Sep. 26, 2008)

Mattchan Sues Flash for Libel
Top Yoshimoto Kogyo comedian Matsumoto Hitoshi (47) has sued the Kobunsha publishing company for libel, it was revealed yesterday. The lawsuit is over an article published in the weekly gossip magazine “Flash” last September 7. The article claimed that Matsumoto, one half of the duo Downtown (profile), was out partying on the town at a time when he was on leave from work while recovering from hip surgery. As the medical leave affected his work schedule for more than a month, any suggestion that he was exaggerating his physical condition would have commercial implications. Matsumoto has asked for ¥11 million in damages and a public apology.