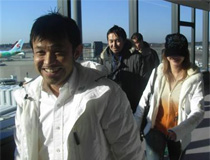 Actress Sawajiri Erika (22) and her boyfriend, “hypermedia creator” Takashiro Tsuyoshi (44), are reportedly planning to tie the knot on New Year’s Day. The couple returned to Japan yesterday from an extended stay in London, where Takashiro is based. Sawajiri is said to have been studying English in order to enhance her global appeal. At Narita Airport, as reporters fired a series of questions about rumors of a January wedding, Sawajiri seemed surprised and said only “Who told you that?!” She was her usual uncooperative self and refused to give any answers, but Takashiro vaguely answered “Yes” to the question. Sawajiri’s mother Lila acknowledged the imminent marriage, adding that her daughter is not pregnant. Sources have said that the couple are likely to register their marriage on January 1, which is an auspicious “taian” day on the traditional Japanese calendar. After a wedding ceremony and reception sometime in January, they will return to London.

• The hype is building for this year’s “Kohaku Uta Gassen.” NHK’s annual song contest has been a New Year’s Eve institution for decades and every year the network tries to build up the expectation as much as possible. Among the highlights being touted this year: Irish singer Enya will perform two songs live by satellite; enka singer Hikawa Kiyoshi (31) will be the youngest performer in 25 years to perform the prestigious final song for the white team, while he will be up against veteran Wada Akiko (58) for the red team; J-pop diva Hamasaki Ayumi (30) missed yesterday’s final rehearsal but plans to perform despite having surgery on Christmas Day after injuring her hand in a fall; the highly anticipated first appearance by popular band Mr. Children will be broadcast from an adjacent studio, and the band will be supported by a 300-member chorus; singer Ishikawa Sayuri (50) will have support from former Megadeth guitarist Marty Friedman and baseball star Ichiro; and SMAP’s Kimura Takuya (36) will lead a tribute to the actor Ogata Ken, who died in October at the age of 71.