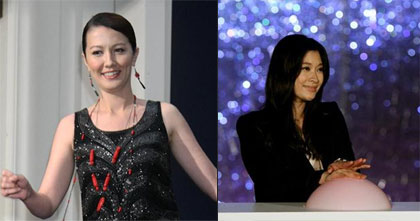 Nakanishi Mona (35, photo left), formerly a talento when she used her maiden name of Yamamoto, announced yesterday that she is finally pregnant. As she had previously done with the announcement that she was undergoing infertility treatment, she posted the news on her blog saying that she hoped it would encourage other women hoping to get pregnant in their mid 30s or later. Nakanishi quit show business at the end of June and started her blog in September.

The former TV announcer of mixed Norwegian/Japanese heritage was a popular talento but plagued by several bad choices on the romantic front. Her career was derailed twice by affairs with men who were not only married but also in the public eye. The first was politician Hosono Goshi (41) in 2006, and then in 2008 it was baseball star Nioka Tomohiro (35). She finally settled down when she and her husband (34), the owner of a real estate investment company, got married in August 2010.

Also in the family way is actress Shinohara Ryoko (38, photo right), who is five months pregnant with her second child. She attended an event last night at the Mohri Garden in central Tokyo, which will be lit up until Christmas Day. Shinohara, who is married to actor Ichimura Masachika (62), has been busy during her pregnancy, including a modeling appearance for jewelery brand Tiffany in September.

Brangelina and Family in Tokyo
More Wedding Bells and Babies