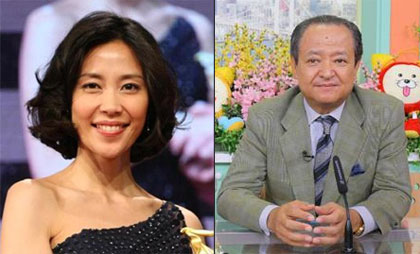 Super showbiz couple Higashiyama Hiroyuki (45) and Kimura Yoshino (35, photo left) are the proud parents of a baby girl, it was announced on Saturday. Higashiyama went straight from a studio recording to be by his wife’s side at the Tokyo hospital where she had what was said to be an easy delivery. The couple started dating after they worked on a stage production in 2008 and they tied the knot in October 2010.

Higashiyama became a star as a member of Johnny’s Jimusho idol group Shonentai, and he remains one of the most influential stars in that agency. He regularly performs on stage and in TV dramas and today he is scheduled to meet fans for a preview screening of his latest movie, “Genji Monogatari” (The Tale of Genji). The London-born Kimura made her drama debut in 1996 and is now one of Japan’s top actresses with two dozen movies under her belt. She made her Hollywood debut in the 2007 “Masters of Horror” series, and appeared in the 2008 international production “Blindness.”

Happy news also for Fuji TV announcer Nakamura Hitomi (32) and comedian Ohtake Kazuki (43), who got married in March and held their wedding ceremony and reception yesterday at the Grand Hiatt Tokyo. Towards the end of the reception, a video about the couple’s 8 years together was screened with a surprise at the end for the 250 family members and celebrity guests – an ultrasound video revealing that Nakamura is five months pregnant.

Mezamashi Host Hospitalized
Less happy news for another Fuji TV employee, as Ohtsuka Norikazu (63, photo right) has been hospitalized with acute lymphocytic leukemia. The network said the “Mezamashi Terebi” morning show presenter had been off work since last Wednesday and was currently undergoing chemotherapy treatment. In a released statement, he said, “After the sudden and totally unexpected discovery of my illness, I am taking a break. I am determined to vigorously endure this difficult treatment and promise to return to my 5:25am post with a smile in a few months.”